This is a major milestone for software businesses because it marks $100k Annual Recurring Revenue (ARR).

Typically, this would call for celebration, as well as a post explaining how our team accomplished this growth in less than a year.

And, if I was a true internet marketer, I would be smart to build this into a marketing funnel for a product or course related to building a software business.

However, while it is a great milestone, and I am very happy that we have achieved it, I thought it would be more educational to turn this into a different case study.

About why what people say in case studies isn't always a reflection of the actual truths, and why you should question case studies, even from respected marketers.

One of the biggest half-truths I always come across is the difference between revenue and profit.

Revenue is how much money a business generates. Profit is what's left after costs are subtracted.

Not surprising, costs can add up to a lot. Also not surprising, many people tend to report revenue, because it sounds a lot better.

Sometimes, even a big revenue number may have an even bigger cost number that leads to negative profit. Amazon, for example, has crazy high revenue, but virtually no profits.

For example, take NinjaOutreach - most people would agree that $8.3k a month is a decent amount of cash, but would you believe the business still runs a loss each month (even before paying founders)?

This is often on account of peoples' salaries and is not at all uncommon in the software industry. Getting quality services to help your business function (and function well) is a worthwhile investment, and if you want to get what you pay for, this is the sort of investment that shouldn't be cheap.

Take HubStaff as another example of a software company that is making over $50k MRR, but spends 60% of its revenue on labor.

"Hubstaff spends around 30k a month on labor and brings in around 50k – that means that 60% goes directly to labor costs. That does not include anything the founders take." - HubStaff

Consider the additional costs they incur, such as payment processing fees, tools, server costs, legal fees, and at the end of the day the founders are left with what is probably considered a reasonable salary - but nothing close to what you would think of from a company that is making more than $500k a year.

Now it's true they have equity in the business (which could be quite valuable), and it's also true that labor is often a deliberate choice to grow over receiving a high salary, but it doesn't change the fact that what seems to be a big number at first, may result in a very average profit by non-business owner standards.

This is so true in fact, that as I was writing this article another software published a case study about going from 0 - $34k a month. I asked them in the comments if they were experiencing any breathing room, to which they replied, "a little". 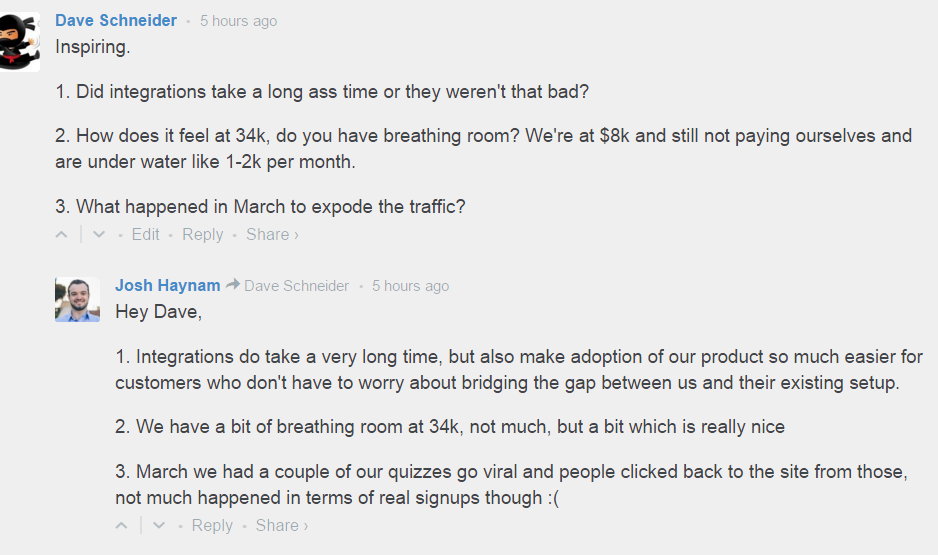 But it doesn't mean it took in six figures this year - in fact, it didn't.

What it means is that a year from now, assuming NinjaOutreach is steady or better yet, grows, then it will take in over six figures (in revenue).

Is it wrong to call it a six-figure business given it's ARR? No.

Does it imply that we took in six figures this year? Yes.

Did that actually happen? No.

In some ways, it's a little bit like counting your chickens before they hatch, and again, it's not uncommon.

Many people count deals won before the money is in the bank or the check clears, for example, so just remember that revenue is a moving target, and is not typically instantly realized.

Two things that no one ever mentions in case studies is how much time or money was invested in the project. Often, it behooves the author to paint the picture of ease, so that more people will get on board.

But this is rarely the case - most things take a lot of hard work and some sort of startup capital.

Again, consider NinjaOutreach, which I regularly spend 60-70+ hours a week on and on which I have invested tens of thousands of dollars.

Now, I am starting to recoup that money, and by the end of this year, most if not all of that debt will be paid off. In that sense, this will likely have been a solid investment.

But it doesn't change the fact that I am working a lot, spending a lot, and making very little.

And how many people have such capital or time available to invest in a business?

Remember, just because a business is "bootstrapped" does not mean it is not costing someone thousands, if not tens of thousands of dollars. It just means they haven't gotten funding for it, and they can't spend whatever they want.

Misconception #4: I Did It On My First Try

Here's a case study I'd love to read.

I did the same thing over and over again. 9 times it failed, and 1 time it worked. This is what happened the one time.

Instead, what you usually read is - this is what happened when I did such and such (no mention of the other 9 failures).

Most marketing initiatives I've done successfully started with a lot of failures. Eventually, some of them turned into successes. Later on, many of those successes turned back to failures again even though it seemed like I did the same thing.

It's not something that I can explain, just general randomness.

But this randomness is important, when, for example, someone is trying to replicate a case study and doesn't understand why their efforts to do the Skyscraper technique don't match Brian's (for example).

Consider that most case studies are not science, they are not guaranteed to work, and are the result of a lot of factors that are probably out of the control of the original author (for example, your niche, pitch, or who you reach out to).

Misconception #5: I Did It From Scratch

I already mentioned money and time, but another question is what other assets did they have?

Here's a recent post by Groove, titled "How One Startup Grew From Zero to $100K in Monthly Revenue In Only 11 Months"

But if you read that case study you see that the founder of the startup benefited from two very import things, which more people don't have access to:

Now, don't get me wrong, even with those things it likely took an insane amount of hustle to experience that growth in that short of a time. I give the founder some serious props, they definitely know what they are doing.

But if you ask me, the real story is how did they build a newsletter with 80k people on it, because with that, yes, you're going to make a lot of money with something.

Mind you, we've also been hustling quite hard at NinjaOutreach, and that hustle has "only" resulted in $8k MRR in 11 months. The same amount of hustle applied to a different project or with different means available can have a very different end result, which is why you should always choose your projects carefully.

Can I Trust Anything I Read?

Here's the deal - it's not that people are lying, and it's not that there aren't valuable lessons to be learned from all of the above examples.

But in every case, there's always more to the story, and it isn't just endemic of software startups, but most of the case studies you read online, including, for example, traffic generation.

And it's important to ask those questions and not delude yourself into expecting the same results if you don't have the same assets available.

What do you think, am I being too critical?