Isn’t cockiness that which you should avoid?  Being confident is a good thing, right?  Are you sure?

Well, yes, it is a positive to be confident yet overconfidence leads to failure.

It is the reason why several entrepreneurs fail despite current position, past success, and positive attitudes.

To err is human and despite a mighty impressive resume, being overconfident is a hurdle that some entrepreneurs need to overcome or else face the peril of defeat.

Here’s why being too confident in business and beyond is a bad thing.

It’s normal to underestimate easy tasks and grow overconfident when faced with harder ones.

It seems confusing and a bit counterintuitive yet neurologists and scientists have come to observe this as truth, even giving it its own name, the hard-easy effect.

Think of the athletic prowess needed to be an NBA player.

Aside from agility and quickness, you have to be good at doing one of the essentials - shooting a basketball, yet the gross majority of players make 75% or less of ‘free’ throws.

Other factors such as the score, playing home or away, and if they made a prior shot come in to play, yet it’s very probable that the easiness of the shot makes a pro player feel less than confident.

In contrast, (*cough) Lebron James, the self-titled best player in the world, though showing impressive statistics throughout the 2015 Finals, was not impressive enough to win the championship.  Perhaps the complexity and difficulty of winning four out of seven games against a good team made him be overconfident.

Entrepreneurs are the same; some companies and CEOs think they’re just too big to fail, even welcoming challenge, yet being too confident is recipe for disaster. 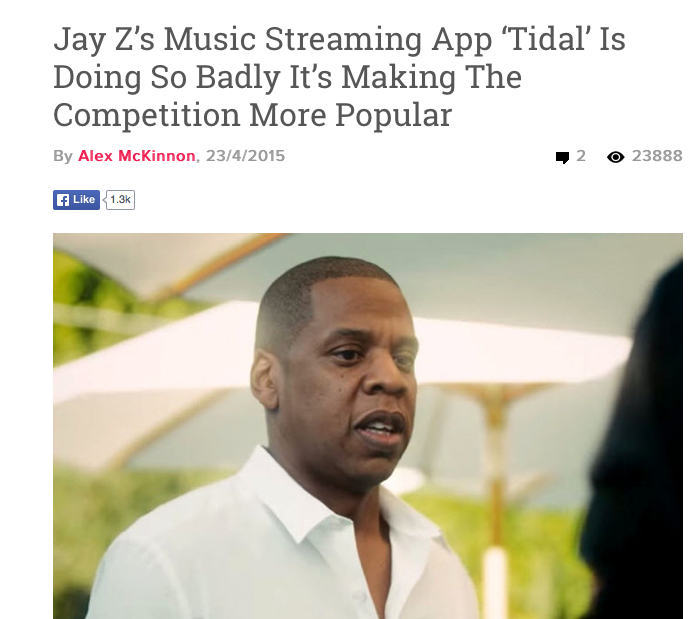 I mean how can a music application, owned and operated by one of the industry’s most successful artists, fail?

Making rhymes is no easy task, but for a proven aficionado of rap, perhaps being great at two things is a lot harder than imagined.

Do you control the world around you or do external factors contribute to success or failure?

Reality is a mixture of both yet one’s locus of control is not fixed.

Whereas one’s personality may decide whether they often think one way or the other, with proven success and time in an industry, familiarity starts to inspire overconfidence.

Being too familiar breeds confidence, so much so for proven winners, that they begin to overestimate their control over external factors.

Let’s consider Google, a tech giant that supplies THE most popular search engine.

However, is each project Google touches dipped in golden success?

Well put and we couldn’t of said it better.  While Google’s success regarding its search engine, mobile operating system, and other ventures cannot be refuted, Google does not have the Midas touch when it comes to all things social.

While it was a nifty to ‘Hangout’ with friends via Google Plus’s video conferencing, the platform, likely started to take some of the social panache away from the likes of Facebook, was largely unsuccessful.

While Google was hardly a startup company at the time of Google Plus’s failure, it serves as a warning to entrepreneurs who think they have enough experience in their field to branch out.

Target is a large retail chain with proven success in the United States.

Executives are great at staking out locations, crunching available data, and championing the success that comes when each new location opens its doors.

On paper, the move across the Canadian border looked pretty impressive.

Buying defunct stores of another chain enabled the retailer to save money on construction costs.

Plus, with over 1,500 stores in the United States, it would be easy to assume the profitable numbers will take root in the North, right? 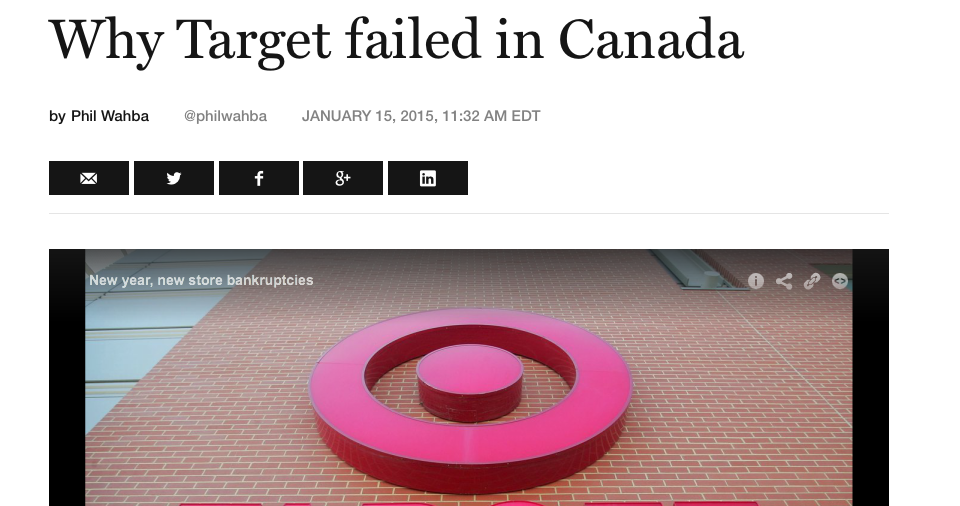 Of course, Target did its homework and devised expectations, but things didn’t go as planned, including a pricing war with Walmart, which has a history in Canada.

Target could not adjust its prices to meet those of Walmart, which made Target seem like a new, unwanted guest that did not do its homework before arrival.

What can entrepreneurs learn from this?  You see overconfidence in business is not a good thing either.

Despite a wealth of information and estimations, too much data can make you overconfident.

Actually, a lot of information can make it too easy to miss essential information, like there’s already a competitor in the area that can get away with charging customers less.

When we engage in an action repeatedly, we begin using different areas of the brain.

A scan will reveal that a novice baseball player is activating different areas than one considered an expert or veteran of the MLB.

Yet, with experience comes a tendency to neglect the simple essentials.

For example, an expert IT person can troubleshoot for any technical difficulty under the sun yet forget to check if a PC is plugged in before making such assumptions.

Being an aficionado or one deemed an expert in an industry creates a tendency to put our guard down, whether that means taking the eye off the pitcher, overlooking the obvious, or underestimating the amount of time it takes to produce a successful outcome. 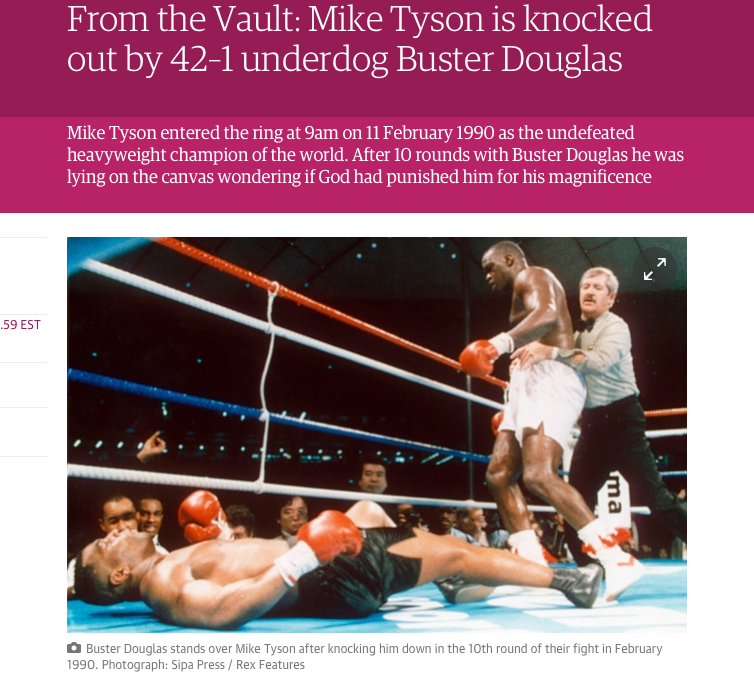 In 1990, Mike Tyson, one of the most ferocious and feared boxers in history was shamed by a 42-1 underdog.

Of course, a number of factors contributed, yet as he admitted, Tyson had underestimated his opponent, and due to his prior success and prowess, was too overconfident and hardly trained for the big fight.  And Buster capitalized in a big way.

Something as simple as creating an ‘essentials’ checklist can dramatically improve performance and help guarantee success.

Despite previous actions and experiences, even a seasoned brand can eventually be surpassed by competitors.

Can you say, “Blackberry”? 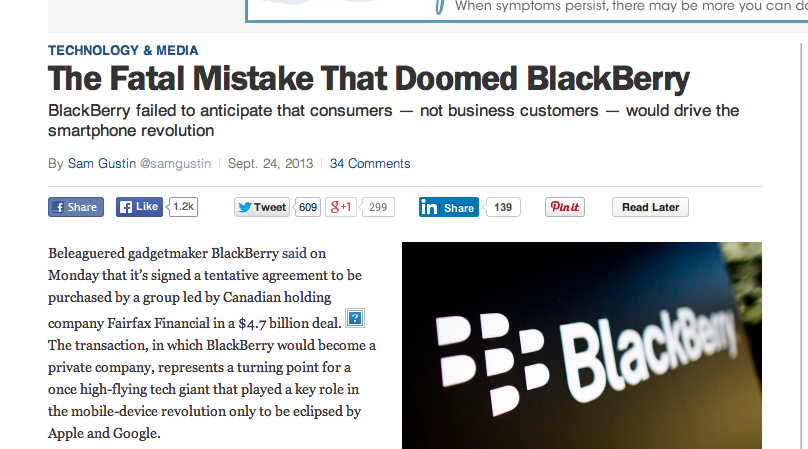 Finding a recipe for success is well-taught, yet it seldom exists, a reason businesspeople need to remain vigilant and the best view each experience with a fresh mindset.

Of course, time brings wisdom along with it, yet the wisest and most successful don't overlook potential pitfalls or underestimate exceptions.

Being consistently successful necessitates a keen intuition and a healthy dose of humility.

Why Not The CEO Of A Multi Million Dollar Business