It's quite rare that a business starts from nothing, flourishes past six figures and then collapses - all within one year.

Normally a life cycle like that takes several years minimum.

I managed to do it in one.

Today I have the privilege of bringing to you this never before seen story - beginning, middle, and end as well as the lessons learned along the way.

The Beginnings Of A Profitable Business

Let's rewind back to February 2013. I'm backpacking around Asia while running a travel blog called ACoupleTravelers with my girlfriend.

We're currently making a few grand a month, as seen by our income reports.

We've been reporting our income for over six months now and we've attracted a dedicated following of other travel bloggers who are interested in learning more about what we do.

One day, after Vicky and I sat down and decided that we were probably leaving a lot of money on the table, we decided to take a hard look at our business.

What we could do to amp things up?

I'm big into processes, so I always try to break things down into the individual parts.

If you want to earn more money you have to understand the levers behind your current earnings and think about what adjustments can be made.

I actually summarized it in a chart on How To Make Any Business More Profitable. 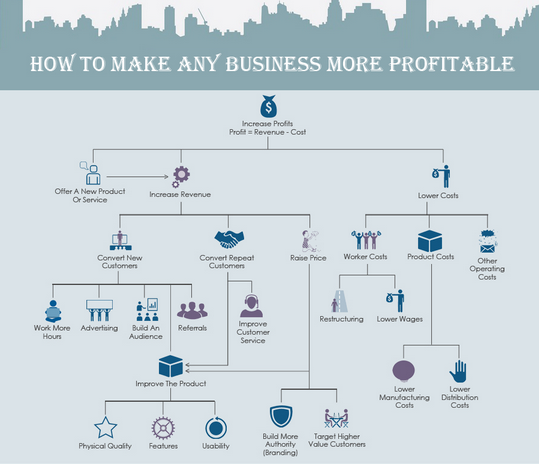 As for us, our business was quite simple and depended primarily on two factors:

Getting more advertisers was easy enough, it was mostly a matter of talking with other bloggers and trading names.

Getting more blogs was a lot more difficult. We had the following options.

What we had on our hands was a typical cost-benefit analysis - we just had to choose the correct answer from the multiple choice.

Later on I would realize that the correct answer was in fact a combination of 1 and 2, but at the time 3 seemed like the best option, because I knew we could get started right away without having to put any money down.

These seemed like the two most important things in my mind.

So, we started our commission based business of connecting blogs with advertisers.

From Zero To Hero In 5 Months

It was relatively easy to get this business off the ground - that's why we chose it.

We just had to build out the system of processes and then recruit our first clients.

After a simple blog post and some direct messaging, we had recruited our first four clients/bloggers.

Here's what March looked like, after we got the ball rolling: 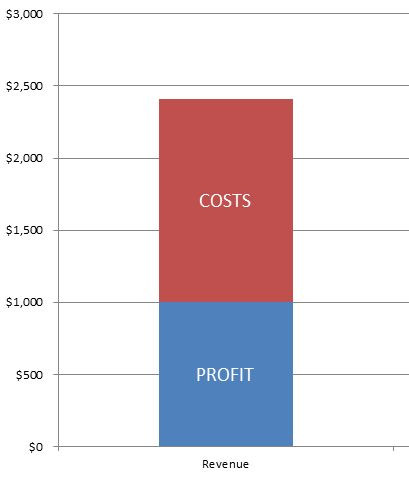 Right off the bat we had a $1k a month business!

I remember being so excited. We had effectively increased our monthly earnings by 33% and had a whole new business to play with.

Now, admittedly, it was a bit of a rough start with some nightmare clients, but I could tell there was a lot of potential.

If you're guessing what the costs were - it was basically what we paid out to the bloggers for using their sites. We netted around 25 - 30% of each sale.

Now "all" we had to do was improve it.

Again, you have to take a look at your business and understand the individual levers. For us this meant

Each month we worked on increasing all of the above, and as you can see, the business grew. Here's what it was after 5 months. 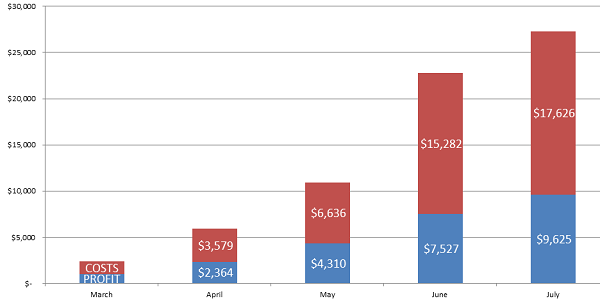 To put things in perspective, by July we were working with around 17 bloggers.

A Steady Decline And Pivoting On Our Model

You might think we could have just scaled this to the moon, but there were limiting factors, namely, how many advertisers were interested in the services we were offering.

At this point, I began to reevaluate my original premise, which was that it was more valuable to work with other peoples' blogs than our own because we didn't have to put money down.

At that time I was scared of investing and was worried I might get stuck with a dud blog and lose my entire investment (usually around $500 - $1k).

Later on, however, I realized just how much we were giving away in costs (see the red bars) for virtually no reason at all.

We were also creating more competition for ourselves in the space we operated in.

It was time to pivot.

We were completely capable of buying our own websites that fit the profile for what we needed, and if we could just find them we could scale out the commission based business we were running.

In doing so we would make more money and effectively have to work less because dealing with clients is a pain and can be time to consume - even if you outsource a lot.

So that's what we did, we bought our first blog in July and started phasing out who we were accepted to the so-called "blogging partnership".

You'd probably assume that as a result of the decline in this business, our overall income went south.

But actually it was the opposite.

For example, while in July we reported $14,500 profit, in January (our last income report) we cleared $20k.

It's just that the commission business was a smaller and smaller part of it, which, nowadays, we have pretty much completely phased out.

Overall, our first side business generated over $150k in revenue (though, much of that was paid out to the bloggers themselves).

Lessons Learned From Starting And Finishing A Six Figure Business

While I don't reveal our current income, I have no problems admitting that we've seen a huge drop off since January due to exogenous factors and declining demand for what we offer.

I realize now that businesses come and go but skills are forever.

If you have the skills and the network to rely on, you'll bounce back.

Many entrepreneurs fail several times before they hit it out of the park.

We hardly failed, but it is sad to see a decline from such a high.

It's important to keep things in perspective nonetheless and remember that business and life can be cyclical.

Maybe that's true for having money, but making money doesn't necessarily have to be that way.

When we transitioned away from the commission-based business and client work altogether we found that not only we were making more money, but we had fewer problems and to top it off were working less!

You can have your cake and eat it too - sometimes!

A lot of people would have just settled with where we were in July and rode that as far as it would take them.

Just because something is making money, doesn't mean there isn't a variation that could make more money (with less hassle!).

And I don't just mean, we could have worked harder, or even worked a bit smarter.

If we had been a bit less risk averse from the beginning and decided on option 2 instead of option 3 we would have gotten a much larger slice of the overall $150k pie.

We were seriously underselling ourselves.

Each month we were making other bloggers thousands and while we weren't doing too shabby ourselves we should have been more aggressive with our pricing.

There was an unlimited number of bloggers to choose from, so if someone wasn't happy we could have just shown them the door.

One of our bigger mistakes was creating competition in the space that we worked in.

Essentially, we were giving the bloggers we worked with everything they needed to do exactly what we were doing.

Then we were posting on our blog how profitable it was.

Do you think that people copied us?

I'm a huge proponent of being open (just look at what I've shared above) but sometimes a little secrecy pays of.

How To Make ANY Business More Profitable [INFOGRAPHIC]

How I Made $60k Buying And Building Travel Blogs Last Year