Lately you have been working a crazy amount of hours on your blog, but you have nothing to show for.

It´s of little comfort that your mother is giving you a compliment on your hard work, when Google Analytics slaps you in the face with the zero visitors count.

And this is a bit frustrating. Nah, who are we kidding?

It p*sses you off.

You have been listening to the experts. Yup, you are writing high-quality content, optimizing your post for SEO, promoting your post on social media, and hundreds of other activities…

…but you just can´t seem to crack the code.

And now your patience is about to end. If you don´t start to get some traffic ASAP, you will do something foolish, like redecorating your living room with a hole in the wall.

Relax. Breathe. I got your back. No need to break your hand just yet.

Let me introduce you to the true power of blogger outreach, and how it helped me to get featured on 158 blogs and build an email list of 3600+ subscribers in 14 months with my first blog.

But first, let´s take a look at…

Why Influencers Are Ignoring You (And Why They Should)

The brutal fact is that…

it doesn´t matter how good your content is, if no one knows that it exists.

And it doesn´t matter how good your blog posts have been optimized for SEO, if you have zero traffic and zero backlinks.

So, what do you need?

And what is the best way to get traffic FAST?

If you answered to get influencers to send you traffic, then a high five to you. *SLAP*

…that the influencers know this too.

During my first 14 months of blogging, I have gotten to know many big influencers.

All of them started out being a nobody, and they hustled like crazy to get where they are today.

So why should they give you a free pass?

Because your mama thinks you´re special?

They will not give you a free pass, and they shouldn´t.

Because it´s all about you proving to them that you are worthy, like they once had to do when they were in your shoes.

Until they deem you worthy, you will be ignored.

You might be thinking “Okay, Tor. I get why the influencers won´t share my stuff. But how do I build a genuine relationship with them?”

Let´s start with the most important part.

You need to know…

How To Reach Out Without Them Calling The Police

First, because it´s not my style, and second, I don´t like to waste time.

Let me be blunt with you.

You don´t matter. Yeah, it might hurt a bit to realize that.

Once you have absorbed that brutal fact, we can start talking about how you can actually start to matter.

The majority of people are all about “what´s in it for me”.

However, if you want to truly stand out and connect with influencers, you need to throw your ego aside.

This has nothing to do about you.

It´s all about them and what you can do for them.

What does this mean?

It´s all about you genuinely focusing on providing a lot of value to the influencers without expecting anything in return.

It´s a long-term game plan (and it works like a charm).

But nothing of that works, if you don´t know how to break the ice and stand out with your first outreach.

So instead of me boring you to death by explaining how I did it, let me just show you…

I`m a part of your wonderful SBO community.

First of all, let me start by giving praise where it`s due.

Regarding your coaching call 8th of January, where you were telling us that if we really put in the HARD work, you would do everything you can to help us.

Trust me, Jon, I`m not easily moved, but I got to admit that I was moved to tears.

Because I have just quit my six-figure corporate job in order to follow my passion, blogging, and I will become a father for the first time in 11th of June. (No worries, I got money saved up, so we are doing all right financially.)

I was moved to tears because your words were exactly what I needed. If there is something I certainly can do, it`s working hard.

You are without a shadow of a doubt one of the best bloggers in the world. No one else can move me so graciously with their words, like you do, Jon.

You are a role model and a true inspiration.

I know that when I got you in my corner, I know that failing is not an option.

It`s only the hard work on my part that remains, before I will become on of your success stories.

I also have to tell you that I`ve been reading through your “52 Headline Hacks” and it was awesome. Thanks a lot for producing such great and valuable material.

I read a bit about him on his website, so I could craft a great question that made me stand out from the rest of the crowd.

Okay, now we have covered how to take the first baby step.

Let´s turn this up your blogger outreach strategy up a notch.

It´s all about how you position yourself.

You can either hit the town with the intention to build genuine relationships with a few new people (but that takes A LOT of time).

You can throw one big awesome party and invite a lot of people.

If the party is awesome and you make sure that your guests are feeling like kings and queens, they will have a good experience.

And guess what that can turn into?

You might be thinking “Tor, that´s cool. Should I throw a party in my mother´s basement and invite Ramit Sethi, Chris Brogan, Michael Stelzner and Darren Rowse?

Let me say this before you make a complete fool out of yourself.

How do you do it?

A roundup post is basically where you invite a lot of experts to answer one question (you can ask them several, but one question is the best).

You will quote them as an expert, give them facetime on your blog and a backlink. In other words you will make them look good in the company of other great experts.

Before my first roundup post, I was a nobody. True story.

Almost no one knew who I was. *Sob*

Then I published my first roundup post, 80 Productivity Tips From Incredibly Busy Experts, and it generated:
- 20,231 page views in 6 days
- 1600+ social shares
- 86 comments 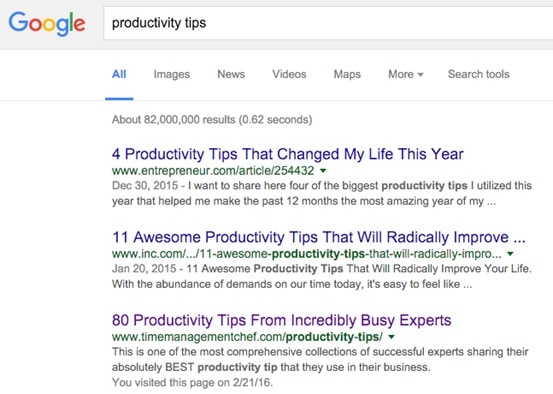 And even though all of the above is kind of cool.

Something even cooler happened.

To see how to write an epic roundup post, check out my step-by-step guide on SumoMe.

But the visitors, social shares, comments and the subscribers were just a bonus.

Yup, the true power of creating a roundup post is that you are able to connect with influencers.

You will reach out to them by actually having something valuable to offer them, instead of just reaching out to say that their blog rocks.

Here are some opportunities that happened from my first roundup post: 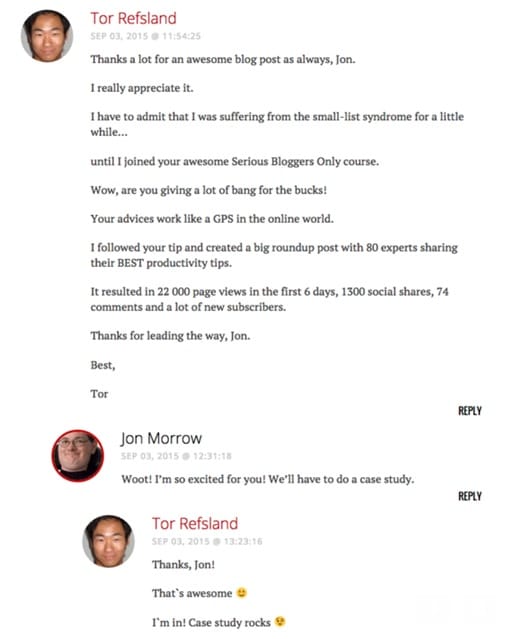 And it also resulted in me getting a bunch of new awesome friends, who are doing far better than just okay online.

But how can networking with influencers really benefit you and your brand?

You are probably thinking about traffic, right?

To build a genuine relationship, and then share each other´s stuff.

Nothing wrong with that.

But you are thinking too small.

You must think bigger!

Why A Long-term Outreach Strategy Eats Link Begging For Breakfast

When the majority of people are thinking about the cool stuff that can happen when networking with an influencer, they think about getting their link shared.

Yes, it´s cool getting an influencer to share your link. It can instantly boosts your credibility and help you attract highly targeted subscribers.

It happened to me…

I got this email thanks to Jon Morrow sharing my post:

I got this email thanks to Danny Iny sharing my post:

That being said, influencers sharing your stuff is nothing compared to the awesomeness that can happen.

The bigger the influencer is, the more you have to give before you can ask for something in the future.

But you also need to think long-term.

When I connect with influencers and start building a relationship with them, I don´t have a strategy, even though I´m usually very strategic.

Because if you have a strategy, that means that you are forcing yourself to build a relationship because you want something specific from that influencer in the future.

1. You will not be so relaxed and natural in your outreach
2. Real relationships are built when you are genuine, and actually just want to get to know the other person

…it is to not have a specific strategy.

Genuine relationships can´t be forced nor manipulated. It has to evolve in a natural way.

It´s just like being on a party and talking to new people.

Either you hit it off and get a real connection or you don´t.

And I know that it can be kind of challenging to grasp this.

You might be thinking “Tor, I get that your strategy to networking with influencers is to have no strategy. But does that really work?”

Judge for yourself. Let me reveal…

The Reward Of Constantly Over-Delivering To Influencers

When you focus on constantly over-delivering to the influencers, they will notice. 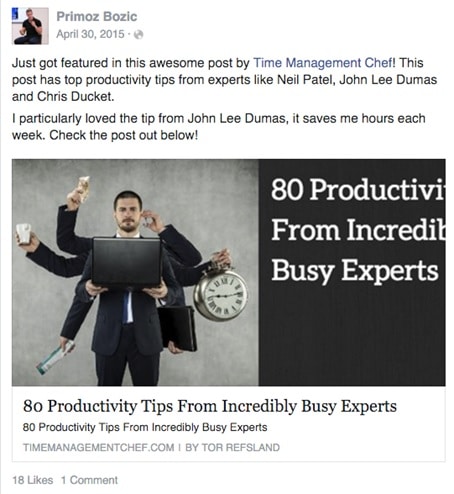 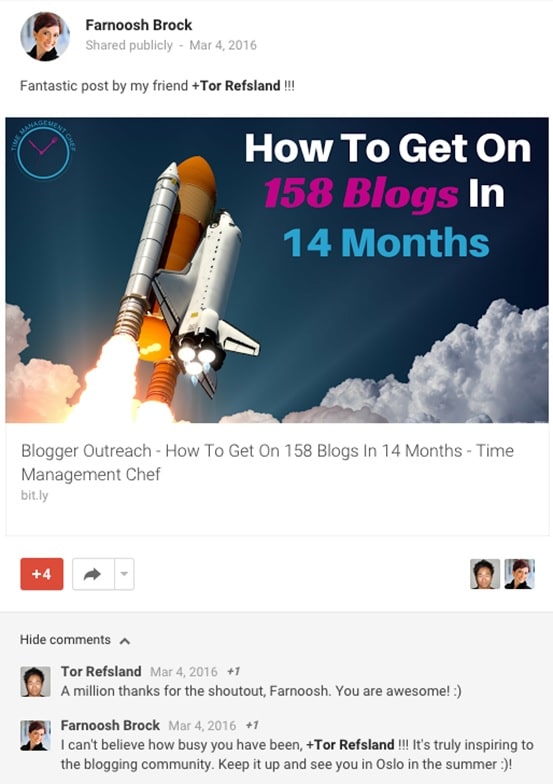 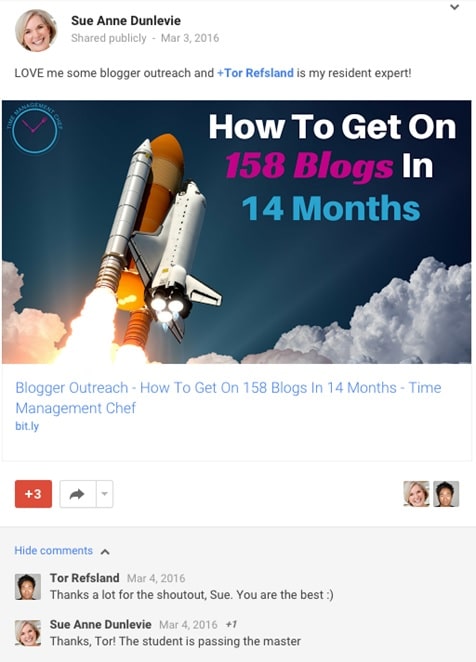 But you know what´s cooler than getting comments?

Blogger outreach helped me get on these awesome interviews:

And that is kind of cool, but it´s nothing compared to…

I got invited to speak on the Entrepreneur Survival Summit together with big names like Brian Clark, JV Crum III, Dorie Clark and Danny Iny

Now we are starting to talk about awesomeness, but it´s still surpassed by … 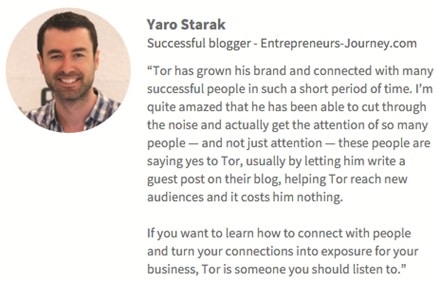 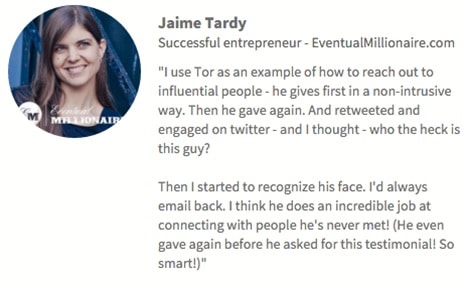 What can be more awesome than this?

I built a coaching business from 0 to $3000 per month in 3 months, where I used blogger outreach to contact cold leads and turn them into paying clients.

What To Do Next…

I have now been sharing with you all the awesome stuff that can happen if you blogger outreach with the big dogs consistently.

But remember, when you network with influencers, go for building genuine relationships without expecting anything in return. That will give you the best results in the long run.

However, all these tips are totally useless, if you don´t APPLY them.

Want to take your brand from meh to noticeable?

What´s your experience with networking with influencers?

How has that impacted your brand?

Tor Refsland helps online entrepreneurs network with influencers and position their brand so they can attract the right clients fast. Want to skyrocket your blog? Get his free course How To Blog Outreach Like A Boss . But he only has 100 spots (seriously). Click here to reserve your spot now, so you can receive some of Tor`s BEST tips (that no one else uses).

How To Drive Results With Influencer Outreach

Company Spotlight | How Benique Achieved 300% ROI By Collaborating With Influencers