Answer - The one that gets accepted.

Isn't it crazy to think that we can be pitching the same concept, but depending on how we deliver it we can get two completely different answers?

So let's focus on how to get the answer we want "yes".

It starts a month in the past.

That's right, the pitch today started a month ago, at least. It started when you began building a relationship with the person; warming them up, so to speak.

You can start by doing the following:

Whatever you do, make sure to let them know about it (in a not so obnoxious way)

Or send them a message.

Hit them a few times a week in different platforms and you WILL get on their radar.

Eventually, you transition to the email. This is your one shot. Maybe you're asking to be featured or for them to share something you wrote.

Either way, I like to break it down into a simple 5-step formula.

Let's look at each part individually and then we will show it executed in one pitch.

It's time to milk the fact that you've been building a relationship with this person for at least the last month.

You have to present the case as to why you are worth the person's time, that you are a credible resource.

You don't need to pull out your entire resume for this one, just explain that you are not a stalker.

When you introduce yourself you don't want to just talk about who you are, but who you are in relation to the person.

For example, from weakest to strongest:

You read their blog regularly, but never interact with them.

You talk with them regularly via email or Skype.

You have weekly luncheons with their mother and discuss when they're going to finally settle down and marry a nice boy or girl.

The higher you are on the list, the more likely the person is to consider you request. It's quite easy to move up the ladder, actually, it just requires you to take some action.

Alright, you're here for a reason.

Again, you don't want to beat around the bush here. The person knows that you are emailing for a reason and the longer you delay the more time you are just wasting.

This is why people advise you to keep your emails short and to the point (but of course remember to hit all the spots in this 5 step formula).

One single sentence is enough here.

Separate these two steps and don't let them get bunched together, otherwise your message might get muddled.

This is the final step and it's the one that 90% of people forget.

Why should this person care?

Introducing yourself and defining your relationship is not enough to catch a big fish unless you are an even bigger fish.

But that's rarely the case.

You have to explain to the person what is in it for them, because, without that, they have no reason to follow through.

Don't make the assumption that the value is clear. State it.

What's clear to you may be completely confusing to someone else - we know what kind of attention (or lack there of) people give to emails.

Putting It Together - Perfect Pitch (A Case Study)

So here's what it looks like when you put it altogether - this was a recent pitch I sent to Sean Ogle. 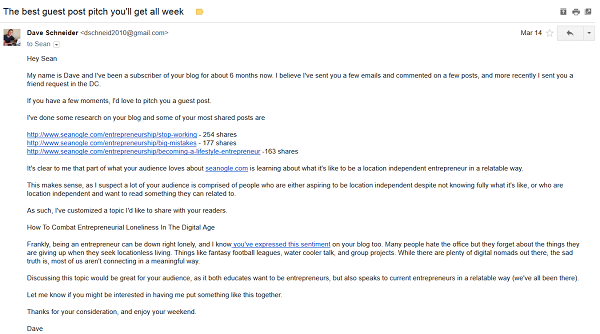 You might also have noticed that I added in a bit of a bold subject title "The Best Guest Post You'll Get All Week".

I did this to get noticed, but I was also confident that I could deliver on that claim.

The end result of my Perfect Pitch?

100 Startup Directories To Submit Your Startup