When you plan to roll out your SaaS business plan it's typical to look at marketing and development as separate entities.

Two islands, only accessible by boat. People often forget the interlink of these two, they place themselves in the category of marketer and developer.

The marketer's job is to drive traffic to the website and to convert it to trial signups through proper copywriting.

The developer's job is to build a great product, so that those signups, eventually become sales.

If you consider a typical SaaS funnel, it would have the following stages:

The higher you are in the funnel, the more important the marketing role is. As you move down, development starts to take over. Once people are in the tool and using it, it really has to sell itself.

So, when we're trying to increase the number of daily signups at Ninja Outreach - we should be focusing on our marketing efforts to drive traffic to the website and generate signups - right?

The more you dig into it, the more you realize that the overlap between marketing and development is greater than it seems.

Development not only can increase signups on its own, but it can also be the source of visitors to a website.

For example, consider Groove, who added a "powered by Groove" link on their customer's widgets: 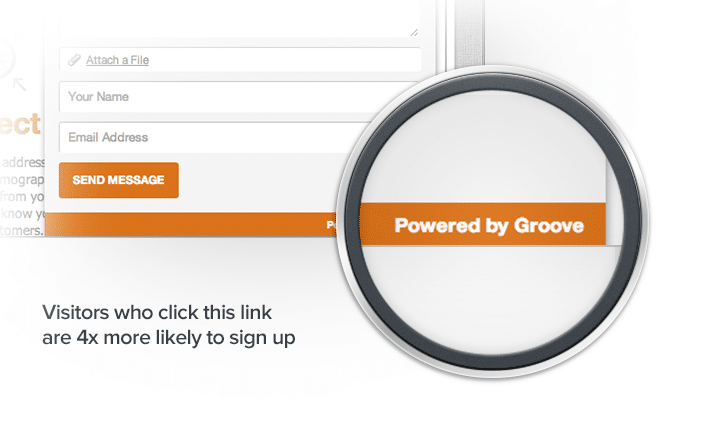 Groove cited this as one of the 7 pivotal implementations they did to get from 0 to $30k a month in under a year. Similarly, I've heard Rob Walling talk about benefiting from this same strategy for his email automation software, Drip. This is purely a development-focused approach to getting more visitors.

But it also allows them to share things from within the app.

One idea we're going to be experimenting with is allowing people to tweet about the software in exchange for a small increase in their quota. Imagine, for example, you're in the settings page and you see a message that says if you tweet this, we'll increase your quota by 50 contacts:

Wow, I am loving @NinjaOutreach for blogger prospecting and outreach - check it out! http://bit.ly/1zdDXoV #bloggeroutreach #seo

It could even include your affiliate link.

In this way, we are adding value to our users, but also building in social media marketing as part of the tool.

In other instances, features (or the lack of them) play a large role as to why someone signs up. It might not be the copywriting or the design, but instead one key feature that is a real pain point for them that they see mentioned.

For example, I might have the choice in the web app to include two features:

In my mind, the advanced search is more tailored towards helping signups convert and retaining current customers.

Because it provides users a superior prospecting solution, which is something that a non signup wouldn't even know they needed (they don't know how good or bad the prospecting is until they sign up).

On the other hand, the advanced import is a feature that has the potential to bring in new signups, because it's taking a very sticky element of a competitor (the fact that you're storing data there) and making it easy to switch.

Given that each of these tasks are fairly similar in terms of development time, if I'm trying to increase the number of signups, as opposed to our conversion rate (which is fairly high at 35%), I would want to go with the Advanced Import feature.

And what about examples of marketing farther down the funnel?

Again, if we had the opposite problem (low conversions), we might look to implement some of the following:

As a result, when I'm prioritizing how to spend our time and budget, I ask the following questions:

Since for us, sign-ups is the big issue, I've been thinking about development more from a marketing perspective and prioritizing that way. Later on, if activation to sales ever seems to languish behind, I'm going to switch gears to think more about development features that will allow current users to extract more value from the software.

Marketing and development are not two islands after all. They can work in unison to move the product forward through all stages of the funnel.

How to Get Things Done With a Remote Team