It is always a hard job to generate leads that actually works the way you imagine. A list of leads works perfectly when you prospected it from a source similar to the niche you work with.

Reddit is a gold mine of quality leads but to my surprise it's still a bit of a black hole - there just isn't much data on it. It also fosters a strong sense of community, like a lunch table filled with people you don't know and aren't comfortable sitting down with for fear of being rejected.

So most of us stay away from Reddit completely, which is a big mistake.

How can we use it to generate actual leads for our business?

Let's start by diving into the Reddit platform and then we'll look at some case studies: Download this PDF

According to one source, the Reddit user profile as of late 2012 is:

But really, you can find just about any type of person on Reddit, if you know how to look.

For the right business seeking the right audience, Reddit can be a gold mine.

Reddit calls itself "The Front Page Of The Internet". It's often where you see things first before they get picked up elsewhere, such as viral news sites.

A recent example I saw of this was an article on Viral Nova that cited its source as Reddit - and I see this ALL the time.

Stuff here can fly. Even my own IAMA sent my site hundreds of visitors, despite the fact that it was down voted rather quickly.

Every month Reddit gets millions of visits which are categorized into the most minute interests known as subreddits. For example, a few of my favorite subreddits:

Not That Interesting (67k readers)

See how specific it gets?

And still, these groups have thousands of members.

Now, imagine that one of these subreddits consisted exactly of your target market.

If you're wondering what the catch is in all of this, it's that marketing on Reddit is tough.

Reddit users are very aware that they are a marketers dream and are very sensitive to being sold to.

Needless to say, there is a right way and a wrong way to go about it. Let's examine two case studies of people doing it right.

Case Study One - Product Announcement To League Of Legends Subreddit

Let's say I had an idea for a new way for gamers to communicate in game.

If I wanted their feedback, I'd probably want to go to where the gamers hang out, so why not check out one of the largest gaming subreddits around, the League Of Legends with over 400k users?

Well, that's exactly what two guys did who thought of a new voice chat program they were considering designing.

But really, it was so much more than that - it was data.

These comments and the discussions they generated resulted in invaluable customer research directly from the target market. 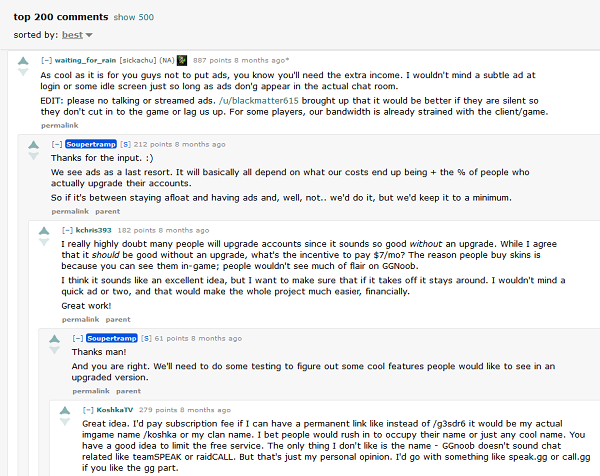 The best proof of concept is where your target market uproariously yells "Yes - I'd pay for that!" (see the lowest comment) and also tells you all of the features they'd look for in such a program.

Now, this product isn't built yet, but those guys generated over 6,000 subscribers to their email list - that's a big win.

All from taking the time to put together something valuable for the community to comment on, and then asking them about it.

Case Study Two - Question And Answer Prior To A Book Release

Who knew that simply answering a few questions could create such a buzz.

In fact, there is a whole subreddit devoted to that known as the I Am A.

It's where people off all shapes, sizes, and professions invite "Ask Me Anything" questions.

And sometimes, it produces incredible results.

One example is when traveler Niall Doherty came out with his thread about crossing the Pacific Ocean on a cargo ship.

Additionally it sent over 15k visits to his website in just one day.

Over 100 of which signed up for his newsletter.

Some might wonder why Niall was taking the time to do this in the first place.

The answer, is he was promoting his book Cargo Ship Diaries, which, consequently sold over $800 worth in its first month.

It's impossible to know how much of it was from redditers, but given the traffic volume, it was no doubt significant.

When trying to connect with our target audience, the first places we should look are where they hang out.

However, it is not just for anyone to go in and promote a product. You have to be creative and purposeful, as were these two gentlemen.

How I Made $60k Buying And Building Travel Blogs Last Year