Startup lessons learned, Let's face it, hindsight is 20/20 and if I knew the things 8 months ago that I know now I would have done a lot differently.

I try not to dwell too much on the past - it can often lead to a lot of negativity as a result of focusing on missed opportunities.

But for whom is that not true?

On the one hand, I didn't know those things then - that's the point. We can't look at the past in today's frame of reference and beat ourselves up about this, that and the other.

On the other hand, I do believe that reflection has its place. Perhaps not so much as to delve into the specifics of X, Y and Z and what went wrong, but to poke holes into the general approach, that, if overlooked, could easily repeat itself down the line.

At NinjaOutreach we've done a lot of things right, which I will be discussing in our next post.

But this post is about the decisions I think were incorrect.

While I do think it would have required a bit of spidey sense to nail all of these, to some degree they were within our capabilities of avoiding.

I've been appearing on a few podcasts lately, and when asked about my number one advice for new entrepreneurs it's always this:

It's OK to want to tackle the world - in fact it's great to have that desire to want to go BIG.

But sometimes BIG is better left for later. Or perhaps another way to think about it, is that you can still go BIG by starting SMALL.

When you start small, you're better able to build a product that accomplishes the one thing you use it for. Later on, you can add on more functionality.

For example, our tool combines prospecting and outreach, which frankly is awesome to have in a single tool. It's borderline our Unique Selling Proposition.

But to some degree it may have been better to simply nail prospecting first.

I think there is still plenty of room in the market for a decent prospecting tool - I know that because some of our users are not even using the outreach portion of the tool - they just like the prospecting.

And I can't really think of many prospecting tools that does what ours does, in our price range.

For us, having one developer, it's difficult to manage so much product, and there are a few feature gaps that we're going to be implementing in the next few months that currently detract from the prospecting and outreach.

It also would have allowed us to make sales sooner, and fund future development.

Above all though, it would have allowed us to get our product to market faster, and to get more feedback from our target market.

Currently Ninja Outreach is a desktop application for Windows only. I get messages like the above all the time, and my answer is always the same - "we'll let you know".

Over the last few weeks we have been scheming about how we're going to build our web app, which we are finding out is going to be absolutely necessary for growth.

There are many reasons why we went with a desktop application for our first generation product, and to be honest, most of the statistics around operating systems showed that 90% of people use Windows, so it didn't seem like it would be a huge deal.

But not in our target market.

This effectively doubles our cost of acquisition.

Although this is a shame, like the first point, it is far from game over. In fact, it is a great opportunity to improve the current product, and given the demand that we've already seen with the current version of the product, we're optimistic that once we implement our web app we're going to see strong growth. 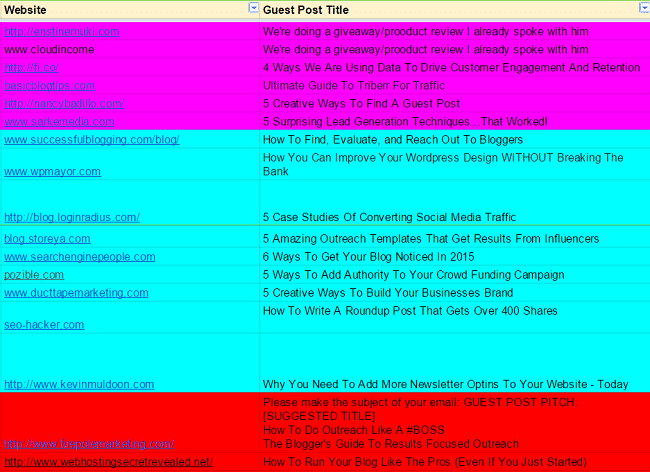 Several months ago I wrote a stockpile of about 30 articles that I wanted to publish on the blog, once per week.

This was instrumental is affording me time to work on things other than the blog, while still putting out fresh content week after week.

What I didn't budget for, however, was all of the guest posting that we would be doing.

In fact guest posting has been our go to strategy for marketing since we launched last month, and it's forced me to write quite a few fresh articles, on top of writing for this blog, which recently has run out of its stockpile.

Had I thought more about it, a stockpile of 50 articles that could be used exclusively for guest posting would have been clutch to get the ball rolling.

Although I'm not behind in any way, it does mean I have to devote more of my time to guest posting, when I would prefer to be working on killer articles for this blog.

I never really imagined us doing an awful lot of phone sales for the product, and to date, we haven't done much.

But in the brief experiment I sat down to make some phone calls, I generated 3 leads in an hour.

Now this might not seem like much, and perhaps it isn't, but there has certainly been a time, mainly while I was sitting in the car on long stretches, where this would have been an amazing productive activity.

In fact, in the last 4 months I have spent around 350 hours in the car. If even a fraction of that time had been devoted to making phone calls, I could have hundreds more leads.

Instead, a lot of that time was spent just listening to the radio or enjoying the scenery (which is not altogether a bad thing, but not particularly productive)

Is it possible these decisions cost us months in development and thousands of dollars? Maybe.

Will they be make or break for the company - I highly doubt it.

Even if I had nailed these 4, there would have been another 4 to take their place - there's always something.

And who knows, perhaps this is even the better draw.

The takeaway is not to beat yourself up about a missed opportunity, especially ones that aren't overly detrimental, but to understand why I didn't make the decision I believe I should have made - that's the real lesson.

100 Startup Directories To Submit Your Startup