November was an exciting month, filled with new partnerships, changes in the UI, Black Friday deals and a huge jump in business revenue.

I didn't think jumps like that were going to be possible anymore, but we proved even ourselves wrong and have shot up to over 300 customers.

Incredible that in our first month of business (January), we had only 3 paying customers - times do change, and in this case, for the better.

Here's what happened in November

Development is happening all the time at NinjaOutreach - we have three full time developers working hard on the product, as well as a UI/UX designer.

Some months we have big releases that are worth writing about.

Other months we have a lot of updates and improvements, but few of them seem so newsworthy that we want to shout from the rooftops.

November was one of those months.

Mind you, we did a lot of neat things:

And honestly dozens of more boxes were checked - seriously, this is what the task management (partially, just for one dev) looks like: 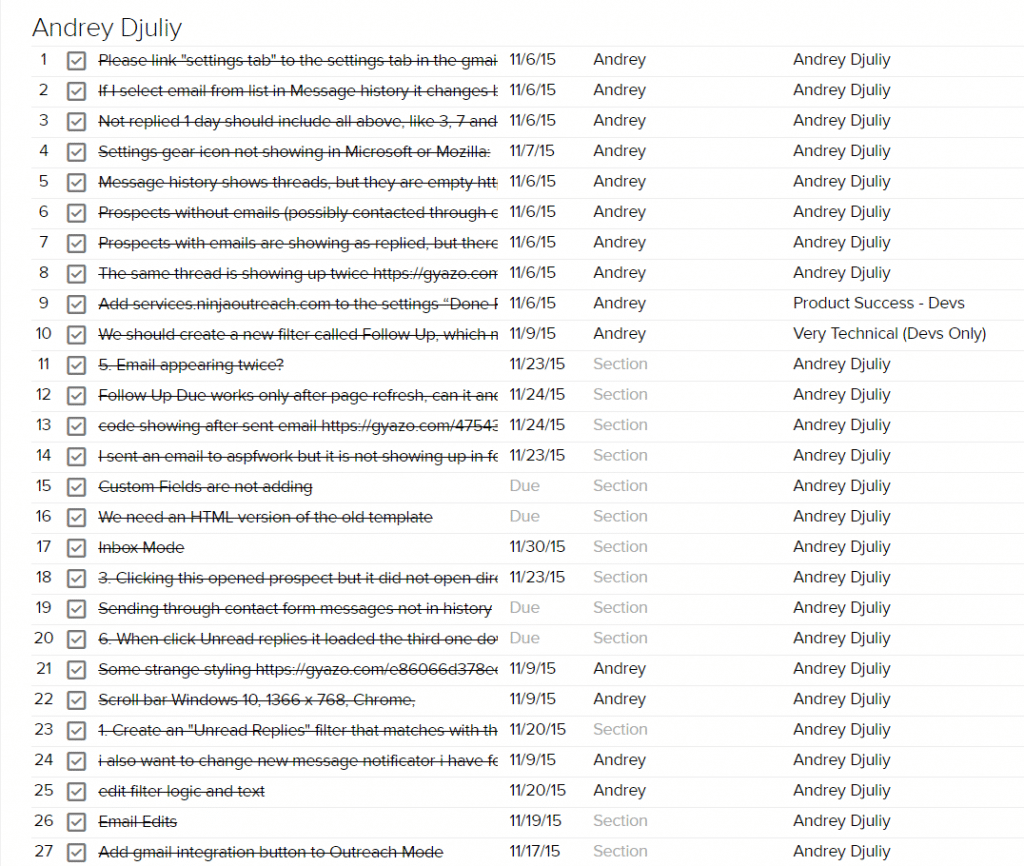 So, I'm happy with the development that was done in November - we did what we set out to do.

But I also understand it's important that there are some key announcements made monthly to make the users aware of the progress that is being made, and I feel we fell a bit short of that. To the user, it might seem that not much was done at all, which is unacceptable.

Luckily, I'm confident December is going to be a big month for feature announcements, because a lot of the work that was done in November was specifically done to set up some big announcements in December.

These are just a few of the biggies that I am very confident will be released in December (two of three are already 90% done, and just need refinement).

That said, one of the things I'm noticing with the application is not necessarily the lack of features, but the need for those features to be activated by users.

This stems from the UI/UX being suboptimal, as it wasn't designed originally with these features in mind.

So, while there are a lot of new features on the horizon, there are also just some general improvements/rework that needs to be done around the user experience to get more people fully utilizing the application as a prospecting AND outreach CRM.

This is why as you'll see below, we've been focusing on onboarding and improving our knowledge base, as well as spending time redesigning parts of the application that seem outdated.

A lot of things went right in November with the marketing, and the business grew nearly 50%.

Firstly, on November 15th we launched a new onboarding sequence.

This was a complete overhaul of how we were doing it before, and brought real structure and logic to the onboarding.

We now have a detailed series of emails and in app messages that are triggered based on actual user events, website sessions, and sign up dates.

So, for example, if a user hasn't integrated his email yet, he's going to get an email about that - instead of about creating a template, which he might have already done.

We're doing this primarily through Intercom, and it took me nearly a week to set up. Here's a glimpse as to how it looks: 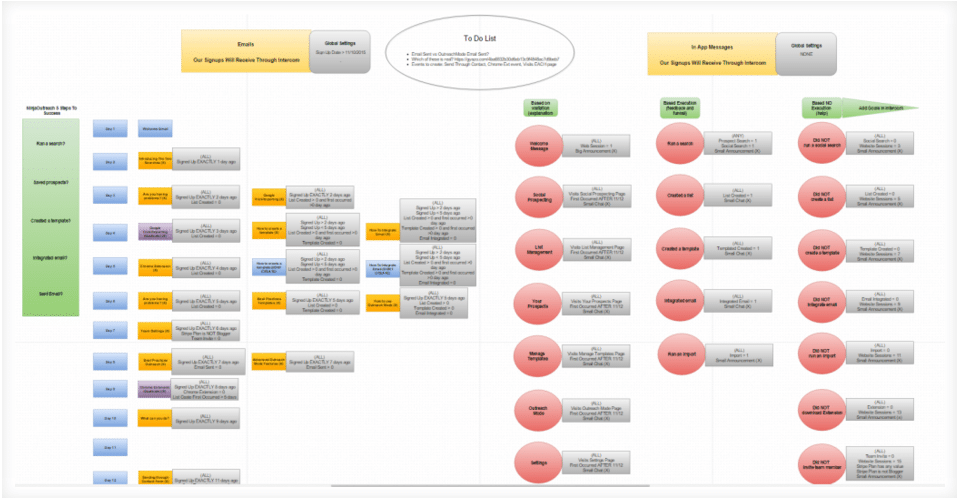 As you can see, there are dozens of emails and in app messages that are released over a 14 day trial depending on which behaviors the user exhibits.

It's a bit overwhelming even, and we're tracking and measuring opens, clicks, replies, and goal completions in Intercom as well.

Prior to this, we just shot out the same messages to everyone, and had many fewer messages altogether.

It's still very early, but the November cohort is converting from trial to paid at a significantly higher rate than the prior two months, and part of that I believe is related to the onboarding improvement.

While there are still a lot of improvements that need to be made to the user experience in the first 14 days, this was a major accomplishment.

In my experience new tools, chosen and used wisely, can have a seriously positive impact on a business.

Especially in a startup, where resources, mainly time, are just so difficult to come by, it's incredibly important to have the right toolkit.

Now, I'll be the first to admit, it can be frustrating integrating a new tool into your workflow/project. Many of the tools requires developers for at least a few hours, which always seems very difficult to spare. Other tools, like Drip, require a complete transition from another tool (in this case Aweber).

But if you're thinking about the long term health of your business, the minute you know it's time to make the switch, is when you should actually do it.

While I don't have any major case studies with the above tools, I can tell you that I"m very pleased with all of them and I believe they are paying for themselves, at a minimum.

Personally, November felt like a month where we wanted to set the business up for long term growth by making the right decisions and investing in ourselves, which at times meant paying for tools that were more expensive than our current solutions.

Given that we just integrated with a new affiliate software, it made sense to see if we could run some Black Friday Deal.

Well, we did, and they were a success!

Without boring you with the nitty gritty details, we did the following: 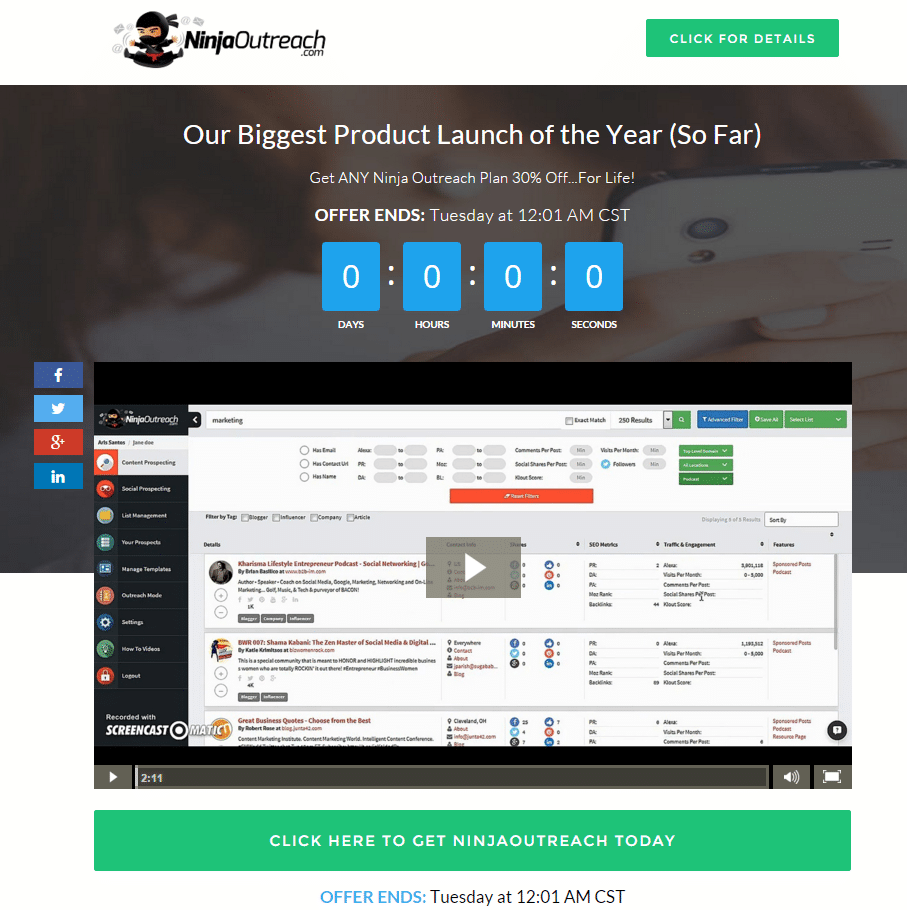 Without a doubt, this contributed to November being our second highest month of growth, ever and dozens of signups came and used coupons codes for the first time (we never had this functionality before).

It felt really great to finally have some real partnerships and affiliate campaigns launch, and have the fulfillment happen the way it should happen - through software.

November was an epic month for the business, hands down - it just seems like everything progressed.

I'm expecting December to be a little slow. I doubt many people will be in buyer mode around the holidays, and some employees will take time off (and who knows - maybe I will as well).

I'm going to take December to finish what we started in November, including knocking out a few big features, and tying up all loose ends before the end of the calendar year.

And hopefully there will be some growth mixed in 🙂

How was your November?

How We Grew 20% In One Month - September MBR