That means people are more likely to consume media on a device that isn’t a traditional computer, but as commercial social media is mostly produced on desktops, a surprising amount of people don’t optimize for other platforms.

An obvious example of this is websites that aren’t optimized for mobile or tablet.

If you do manage to drive your customers to your website, the last thing you want is for people to abandon their customer journey because they can’t use your website.

You also don’t want a social media message that won’t read well on a smaller device.

Why you should care about the mobile user’s experience

At the FigDigSearch event - Google stated that 40% of users abandon sites that take more than 3 seconds to use.

If you’re not prepared for mobile, you will miss the larger part of your potential audience.

People in the UK spend 66 hours a month on their smartphones. In the US, people spend twenty hours more - that’s an average of 4 hours a day.

85% of that time is spent in apps. That means if you are using Facebook ads and making them available on the audience network, then people are most likely to see your message in an in-app ad. 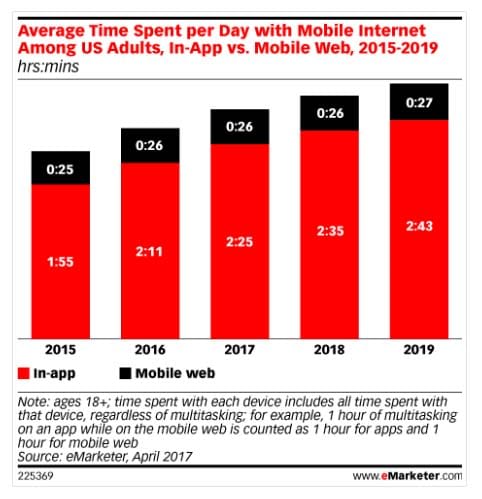 Between them, Google and Facebook take up 25% of the time spent on apps.

Even big companies like Amazon and Apple only take up 3%, Yahoo takes 2% and, Microsoft and eBay get 1% each.

That means nearly two-thirds of the time (65%) spent on mobile is spent outside those app networks.

Social networks take up 14% of the time spent on smartphones, which leaves 86% when people’s attention will be in apps where they won’t see your commercial messages as you might expect them to be presented.

89 is an important number for getting your message read.

89 is the number of characters that you can have in an interstitial or in-app ad.

If you need more for a message, then it will be lost.

If someone clicks on that ad, it won’t take them to read the rest of it - it will take them directly to your landing page - and they may not know why they’re there.

Need a boost? We are one of the most innovative vendors in the whole country, using our nitrogen infuser to create a cold brew coffee that will give your morning a nitro boost. We use only natural ingredients and bottle everything ourselves in our family run distillery.

The copy isn’t terrible. Iit starts with an active question, and shows the unique selling point of the product.

It’s just too long. That’s how the post would look on a desktop feed.

When you reformat the message to how it would appear on a mobile feed, it starts to look like this:

Need a boost? We are one of the most innovative vendors in the whole country, using our nitrogen infuser to create a cold brew coffee that will give your morning a nitro boost. We use only natural ingredients...

The width of the mobile feed is 45 characters.

What was a too long piece of content becomes a paragraph that people will just skip past rather than read.

It also goes beyond 210 characters - which means that the end of the message becomes a “read more” click rather than a clear message.

The tag line is also lost behind that “read more” click.

Now, here’s how it would look in an in app ad:

Need a boost? We are one of the most innovative vendors in the whole country, using...

This copy could be selling absolutely anything. It could easily apply to a marketing agency as it could to people selling cold brew coffee. On the device where people spend most of their time, in the apps where they spend two thirds of their time, the message is lost.

To reach the most people, keep your message at 90 characters or less (and sometimes less is necessary, depending on the characters you use - “i” and “l” take up less space than other letters). Let’s focus on front-loading the message into just 90 characters.

That’s what the copy will look like on both the in-app adverts, interstitials, and a mobile feed.

The 90 characters of the in-app ad equates to two lines of copy on a Facebook mobile ad.

That means the whole message can be taken in easily without people having to scroll past.

It doesn’t mean that every message you write needs to be written in 90 characters, but it does mean you have to front-load your message so it makes sense even if it’s going to be shorter.

Here’s what a longer desktop version would look like:

We only use natural ingredients in our family run business. You can’t get a coffee like this anywhere else, thanks to our patented nitro infuser.

With this longer copy, you will get the “read more” prompt - but it still makes sense on a mobile feed - and gives you an incentive to click to read more and find out what else is there:

We only use natural ingredients in our family run business. You can’t get a coffee like this anywhere else, thanks to (read more)

This time, people can read the content on all parts of Facebook’s Audience Network, and still make sense of what is being said.

Let’s go through the checklist:

Great - do all those things, it’s good practice - but is it really going to make people share your content?

Firstly, your message needs to be clear and to the point. People won’t share if they can’t read and understand it.

Secondly, you need to think about the things you share when you are on social media.

You share things that are interesting, that are funny, that are cool - and that are timely.

You share things that have value on their own, not because they’re trying to tell you something.

To get your message shared, it should be funny, interesting, cool, timely, and has value on its own - but also backs up your brand image.

Here are a couple of examples from brands who have done this recently.

In the UK, one of the recently trending topics on Twitter was #GBBO, based on the new series (with new hosts) of Great British Bake Off.

One brand that jumped onto the back of this was Dr. Oetker Baking UK. They are tweeting about the upcoming show.

It’s a great example of a brand matching up something that’s timely.

Here’s one of the tweets they put out:

The ad is about capturing an emotion, not selling baking products - although they are also heavily featured.

It also ties into the sense of nostalgia that’s going on, with a gif from the original Beauty and the Beast (which is also a sly comment on the weird animated promo Channel 4 have been running for GBBO).

Dr. Oetker didn’t need to steal a Disney gif - they’re one of the official sponsors of the show - but by matching people’s anticipation, the brand is humanized and Dr. Oetker is no longer just seen as a frozen pizza manufacturer.

Another example of newsjacking done well is the recent promo for “Kingsman: The Golden Circle.”

The news in the US has been full of stories about the recent total eclipse - and this video stages it like it was all just a huge promo idea for the movie.

With people so interested in the story (and getting slightly sick of it), it’s a great way to be funny by sharing the video with people.

The brand pokes fun at itself, gets in its sales pitch - and even educates us about how much thrust would be needed to move the moon. It’s funny and timely.

One of the most shared tweets of all time? This one from Carter Wilkinson posted on April 8 2016. He has been trying very hard to get a year’s free chicken nuggets from Wendy’s:

HELP ME PLEASE. A MAN NEEDS HIS NUGGS pic.twitter.com/4SrfHmEMo3

Why is it being retweeted? Because it’s funny, it’s helping people out, and it's a challenge.

All Wendy’s needs to do now is wait for the tweet to stop getting retweeted, and offer him two months of free nuggets for getting a sixth of the way there.

It’s not timely, but it is certainly interesting and entertaining - Wendy’s is getting Rick-rolled by the Internet, all for their own benefit.

This isn’t content that can be created - but it does show the importance of paying attention to your customers, and building a genuine relationship with them.

Getting shares is all about the quality of your message.

Although you may be trying to sell over social media, you need to make sure that you build up a relationship.

You have to buy your audience dinner first. That means entertaining them before you can turn them into a lead.

How can you get your message read and shared?

If you try and do too many things at once, you will do all of them badly.

Make sure you have a clear message that can be easily understood.

Make sure that it can be easily read on any device - 90% of users start a task on one device and then complete it on another.

Make sure your message is appropriate for the social media platform you are using, but do what you can to make it stand out from the competition.

Front-load your message with key information, and be aware of the cut-off points.

To get your message shared, be certain of your brand and your audience.

If you know what you stand for, and what your audience likes, then you can “newsjack” and find things that apply to your brand and also get your audience’s attention.

Make sure that your content would have value even if your brand was taken away from it. Don’t get so taken by an idea, that you put content out that doesn’t match with your brand values.

How can you change your content to make it more effective?

You are trying to get your message to people where their attention already is (with all the effort and expense you go through putting it there).

Make sure it’s something they want to engage with.

Zachary Jarvis is a Digital Marketer with one thing on his mind: Results. Uninspired by the never ending talk of ‘vanity metrics’ in the world of digital marketing, Magnate was founded - the ‘Social-First’ marketing agency.  On the very rare occasion he isn’t watching Step Brothers in his spare time - you’ll find Zachary in the thick of social platforms, learning what makes us tick. This is driven by a fascination (perhaps a slight obsession...) with market trends and consumer behaviours.

From 400+ to 1k+ Links; The Ultimate Competitor Link Building Guide

6 Ways to Build Online Presence for Your Business

How To Improve A WordPress Blog? - 5 Things to Consider