After operating five years in Bolivia, McDonalds en bolivia closed its eight branches and left the country in 2002.
Lack of marketing research: Mcdonald closed all their restaurants in bolivia

Bolivia awarded as the first McDonald’s-free Latin American nation, after fighting for more than a decade to keep their business ongoing. 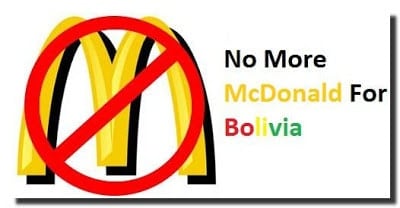 For the last 14 years in the Bolivia in spite of many campaigns and promotions, McDonald’s was forcefully closed in 2002, its 8 Bolivian restaurants in the major cities of La Paz, Cochabamba and Santa Cruz de la Sierra.

After that McDonald also announced that it would close its restaurants in seven other countries due to poor profit margins.

A documentary film named “Why did McDonald’s Bolivia go Bankrupt,” was developed for knowing the reason of the failure of McDonald.

In which they try to explain why did Bolivians make this happened to McDonald?

The documentary film consists of interviews with different concerned people for example cooks, sociologists, nutritionists and educators who all agree that Bolivians are not against McDonald they are just hate ‘fast food,’ that always dislike in Bolivia.

This is an interesting story but I found one thing missing and that is marketing research. How could a global business do such a common blunder? Every business before starting its operation in a new country very first conduct a marketing research that is a necessary step for the effective ongoing business.

Marketing research consists of target market’s behavior and some common anticipations that one business couldn’t afford to ignore. McDonald even after operating 14 years ignored the basic need of Bolivians.

If you keep in mind what the basic storyline is:

This unusual game attracted worldwide attention toward fast foods in Latin America. As it is said by Bolivian people that “Fast-food represents the complete opposite of what Bolivians consider a meal should be.

To be a good meal, food has to have to be prepared with love, dedication, certain hygiene standards and proper cook time.”

The above statement shows the taste and need of Bolivians community. I don’t know why McDonald miss this.

Doing business effectively it is a basic need to know about your target customer’s preferences.

7 Digital Marketing Mistakes You Should Avoid

Take a Pass on the Most Influential Bloggers: Here's Who to Target Instead