The other day I received one of those emails that, as a startup founder, you simply dream of. 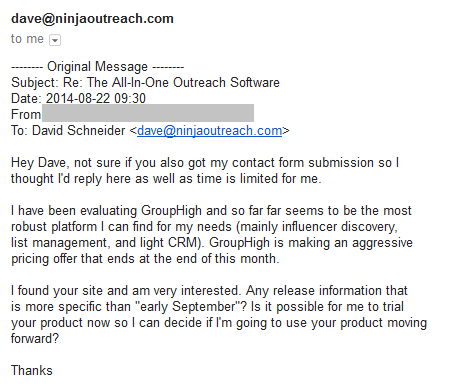 To break it down, this is the situation

Basically, I couldn't ask for more. So here was my reply: 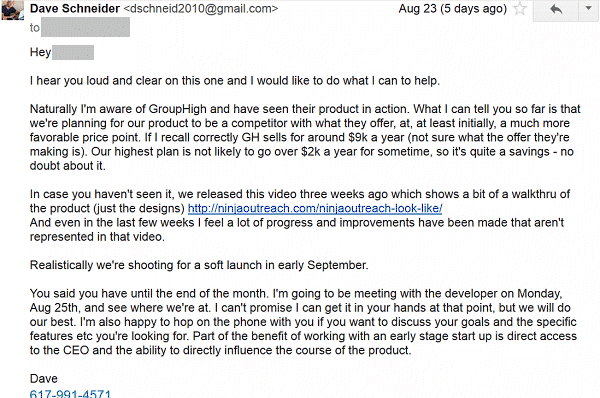 Of course, at this point, we're in beta and therefore I don't have a product I can offer him.

You might think that that email would have done the trick, or at least enough to get him on the phone - but here's what happened next:

Although this was never a full on customer to begin, it's a tough blow to lose a prospective customer to the competitor so early on, especially when you're only a few weeks away from release.

What Should I Have Done Differently?

I try not to beat myself up about these things.

This is bound to happen sooner rather than later, and it will probably continue to happen as long as we are in this market. You're going to lose customers, and you have to accept that.

But that's not an excuse for not trying to learn and improve your customer success approach so that maybe next time, you make the sale.

Plain and simple, I dropped the ball on this one. It took me over a day to respond to the customer, because I wasn't checking my email.

This was a very time sensitive matter, and had I been a bit more Johnny on the spot with my response, it might have made the difference.

Instead I allowed the customer time to wait, time to think, and time to consider the competition and wonder if we were even a legitimate company.

Push To Get On The Phone

The more you can get the customer to move to phone, the more time and attention you can get from them, and the more of a case you can build as to why your product is superior.

Speaking on the phone helps build relationships and build trust. It also shows a level of commitment that most companies simply can't or won't do.

It should have been my primary focus.

You'll notice in my response that I made an offer to speak with the customer on the phone. It went something like this:

I'm also happy to hop on the phone with you if you want to discuss your goals and the specific features etc you're looking for.

Here's how that should have went.

Let's hop on the phone and discuss your goals. How does 5pm EST tomorrow work?

Instead of leaving it up to the customer to decide in such a wishy-washy way, I should have been more insistent about making this connection.

I pride myself on being transparent and honest.

If the competitor has a fine product, I'm not going to lie and say it's crap.

But that doesn't mean I shouldn't make an effort to show why ours is better.

Although I did highlight the price differences between the two offerings (ours being much cheaper) I didn't dwell on the many features our product offers that GH doesn't.

Instead I referred the customer to a video, which is just extra work on his part to watch.

Even if I had done all these things, it doesn't mean that we would have made the sale.

At the end of the day, when you're in beta, and another, established competitor is offering a functioning product at a competitive price (or at least a competitive discount) it's tough to compete.

That said, even the few adjustments above would have contributed to a stronger sell.

How to Export Google Search Results to Get More Leads

How To Get Links W/ Infographics And Guestographics With NinjaOutreach

Decision Making | 4 Things We Did Right With NinjaOutreach