At NinjaOutreach we know perfectly well how important it is to offer up-to-date and relevant information to our customers. For that reason we have invested a lot of money and time into a complete rewrite of our social engines. The rewrite took 5 weeks, and we have since collected 7,340,568 Instagram profiles, a considerable increase from the 400,000 we had before. Of these:

In the following sections we share some interesting insights from our data science team (of course, only the profiles that are still existing are taken into account).

The distribution of the number of followers is incredibly skewed, so it's very difficult to visualize it in a readable manner. This is because the great majority of profiles have a low number of followers (less than 1000), whereas there are profiles with hundreds of millions of followers. This is a difference of 5 orders of magnitudes. Thus, the only way to produce readable graphics is to use a logarithmic scale on the x axis:

As one can see, profiles with a high number of followers are pretty rare: only 10 profiles have more than 100 million followers, and 420 have between 10 and 100 million. The log scale is necessary since on the other hand we have almost 4.5 million profiles with less than 1000 followers. One of the challenges we face at NinjaOutreach is to present only the profiles that are relevant to each of our users.

The ratio is very low if a person follows a lot of profiles while being followed by very few accounts. On the other hand, it's very high for the so-called influencers, which have a big audience while at the same time following very few accounts. If the denominator is zero, the ratio is undefined. On average, Instagram accounts have 296 more followers than following, but for verified profiles this ratio jumps to 17,910.

Perhaps the single most important metric that can reasonably summarize an Instagram profile is the engagement rate. It is defined for each unit of content published by the profile (that is, each post) as the ratio between the sum of the number or likes and replies and the number of followers of the profile:

This metric is of course an approximation, but as we will see it is extremely useful in identifying the quality of a profile.

First off, we plot the distribution of the engagement rate across micro and major influencers. This is the result: 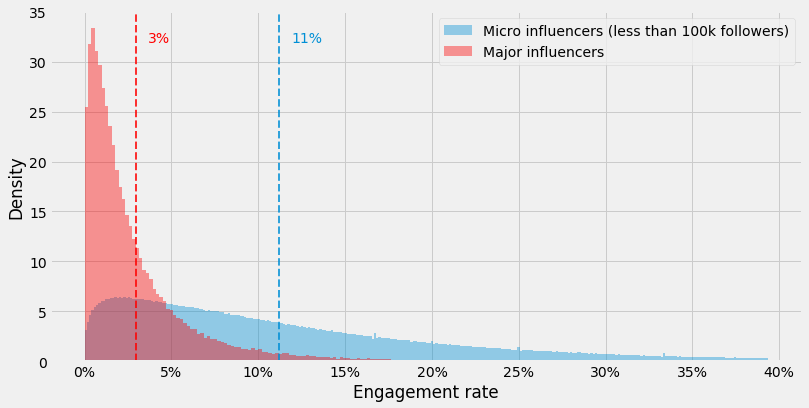 One may also wonder how the engagement rate and the followers to following ratio are related. As the chart below illustrates, there is no simple (e.g. linear) relationship between the two metrics:

We can therefore conclude that the engagement rate is a metric that we can use in combination with the followers to following ratio.

There is a noticeable difference in engagement between image posts and video posts, and the contrast is even more pronounced for major influencers.

The result is that, on average, for a micro influencer image posts have 1.5 times more engagement than video posts, while for major influencers this multiple increases to more than 2 times. Note: this is not to say that video posts have terrible engagement, but the conclusion is that with respect to image posts and as calculated by the formula above the engagement is lower for videos. This may be explained by the fact that the Instagram application itself facilitates the action of liking image posts over video ones. However, investigating systematic biases like that one is outside the scope of this post.

That is only one side of the coin: the engagement quality is also determined by replies and likes. On Instagram, the number of likes is much higher than the number of replies. On average, the profile of a major influencer will have 237 times more likes than replies, while for micro influencers the multiple is lower at 42 times. Replies are usually considered stronger engagement than simple likes, so this should also be considered by those that have to decide which influencers to partner up with for sponsored campaigns.

The engagement rate can be used as an indicator of profile quality and can produce some accurate results. In particular, it appears to be very good at pointing out which profiles don't have genuine engagement.

From the formula that defines the engagement rate, we can see that this rate can be above 1 if the sum of likes and replies exceeds the number of followers of a particular profile. This can happen for a fraction of the total posts of a profile (e.g. if one or two posts gain extreme popularity for some reason) but it cannot certainly be the norm, since the number of followers will balance out.

For healthy profiles the engagement rate will be well below 1, but we can look for profiles with huge rates as an example of the opposite. In fact, in our dataset we have profiles with engagement rates well above 100. For example, the user ksjh2537g has a rate of 32,200%, having 21 followers and a single post with 6662 likes and 118 replies. This is a profile that advertises an Indonesian business that sells likes and followers: 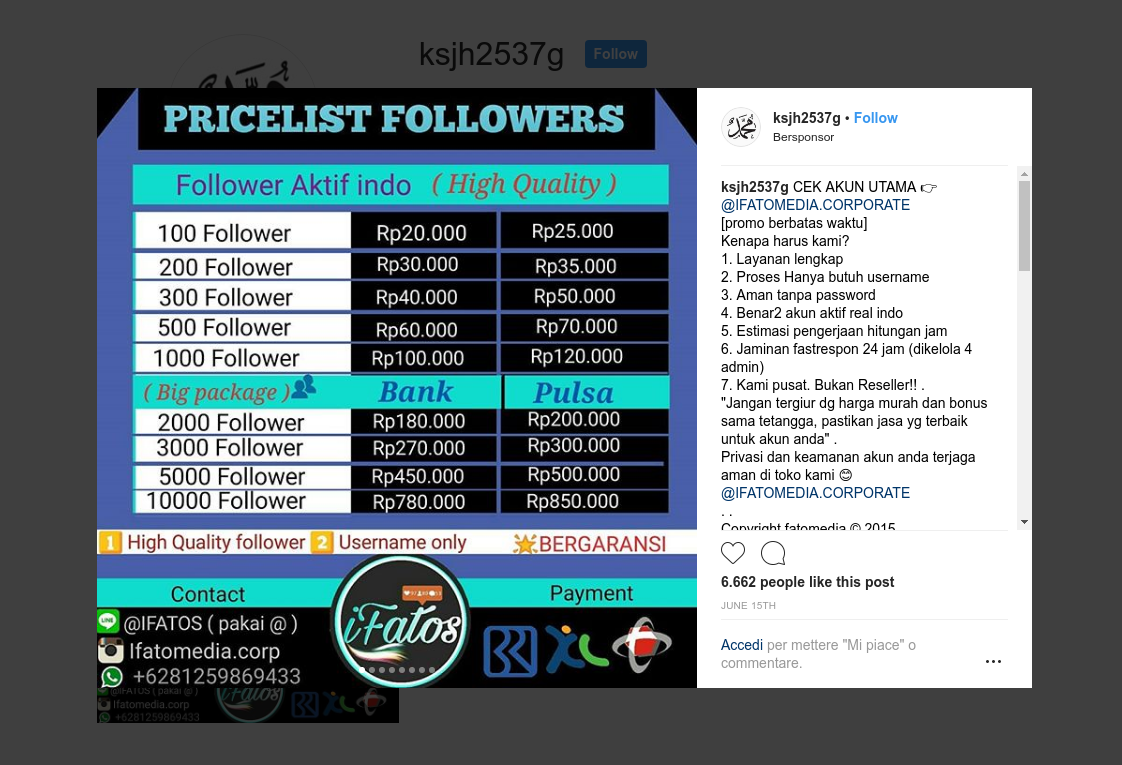 In this post we performed some very high-level exploratory analysis of the profile data we collected. In particular, we observed the usefulness of two key metrics, the followers to following ratio and the engagement rate. If you are looking for influencers as part of an advertising campaign you should focus on these ratios to filter out the profiles that don't align with your campaign targets.

In the next post of this series we will perform an even bigger analysis with 6.5M more profiles (for a total of 13.5M profiles), and we will explore geolocation data of the profiles and the differences between profiles belonging to different categories of profiles.

5 Things NOT to Write in Your Influencer Outreach Email