In this installment of our influencer marketing series, we're going to be exploring how a single guest post resulted in over two dozen sign ups, hundreds of visitors, and all around great credibility.

But first, let's start with the basics - what happened?

Back in August, we did a guest post on Unbounce (a very popular landing page software), called:

How One Startup Generated 400+ Leads Through Other People’s Content

Since then, that post has sent us over 500 visitors, and converts at around 4%, which is twice what the usual visitor to NinjaOutreach converts at.

So, how did this come about?

You may be thinking that we know someone at Unbounce, well, at the time we certainly didn't.

We identified Unbounce as an influencer in the marketing space, and simply went through their guidelines to submit a post.

Here was my pitch. 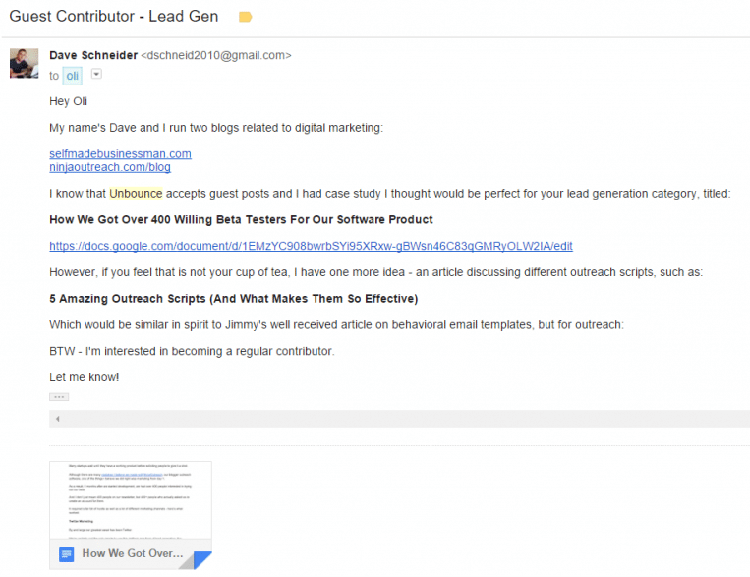 You'll probably recognize all of the standard elements of a solid guest post pitch:

I was quickly forwarded from Oli to their content manager, Amanda.

BTW - You may notice that I actually used my personal Gmail for this as opposed to my [email protected] email, which just goes to show that a "random" person with a quality pitch can get through to even the top influencers.

Stage 2: The Back And Forth With Amanda

I wish I could say that the post I sent over was immediately accepted - end of case study.

The reality is that Amanda and I went back and forth a few dozen times over the course of several months. In fact the initial email was sent in April but the post wasn't published until August.

There were a lot of changes and edits that had to be made until we finally could agree on the concept and the post itself.

We changed the title, added a few sections, images, and citations, and just made it a great fit for their audience.

Overall, it probably took around four hours - but it was worth it, as the post was VERY well received on their blog:

Not only was the post well received and ended up sending us a ton of traffic, but Amanda actually invited me to contribute again (an offer which I've been meaning to take her up on).

Additionally, because the post turned out so well, I frequently cite it when I'm trying to land posts on other blogs.

For example, here I am leveraging to successfully get a guest post on HubSpot (more on that, later on in the series).

As you can see, it's important to leverage the credibility you build elsewhere to continue "moving up the chain" so to speak.

This was not even close to the easiest guest post I've ever landed BUT it was one of the most successful ones.

It worked primarily, because I put in the effort to identify Unbounce as a potential "target" and reach out to them with a personalized pitch.

I then took the time to do the appropriate back and forth and wrote them an exceptional article that generated more traffic on their blog than their blog home page during the time period it was up.

Commercial Marketing vs Social marketing (What You Need To Know)