With the start of the new year it's always advisable to take a step back, look at the current state of affairs, and realign one's self with the big picture.

I could go on and on, but that about sums it up - not a great year for business.

My mindset right now is that less is more.

This doesn't just mean doing less in terms of projects, but less all around:

I believe there is a scenario out there where I am doing less all around but actually achieving better, more meaningful results and living an all around healthier and happier lifestyle on account of the increased focused.

I just have to go and find it.

So I ask myself - what is the one professional goal that, if achieved, would make 2015 a great year?

And as it turns out I actually surmised an answer to this question several months ago, and I believe it still stands:

If I did nothing else, but achieved that, I think I could say 2015 was a successful year, professionally.

There's no great answer to this question, except that it appears to be a reasonably attainable goal that would allow us to continually invest in the software and provide ourselves with a small income.

It also sets us up for a potentially larger goal in 2016, something like $100k MRR as well as funding from outside investors at a solid valuation.

With that in mind, I can start to set mini milestones to gauge progress, things like

And so on and so forth, until the business plan is solidified.

So from now on, this goal is going to be my main focus, and this blog will reflect that.

There won't be any new projects this year, just NinjaOutreach.

What are some of the obstacles that could get in the way of this goal?

This is a startup.

We have limited funding, limited man power, and limited connections.

In short, it's an uphill battle, and we are already seeing how difficult it is with one developer and a handful of very part time contract work.

But I *think* that with the right amount of hustle, and perhaps a little bit of luck and timing, we an overcome this.

I have three more months of travel planned for the beginning of 2015, then I'll be heading home for awhile.

Although I love travel, it is quite difficult to get real work done at the same time.

Being a digital nomad is hard - I really don't know how anyone does it!

Personally, I am more inclined to the idea of living and working abroad, or taking short trips in between longer stretches of work.

Luckily, this goal is more heavily weighted towards the end of the year anyways.

That is to say, if my expectation would be to sign up 10 people in January, and 100 people in December.

So these next three months are the "least" valuable of the year.

And with the right focus, there should be enough time to get it done.

Perhaps the biggest obstacle is myself and my mindset.

I think you have to accept that some degree of uncertainty while believing the answer is yes.

I'll just keep this quick with traffic and income to be consistent with the monthly reports. 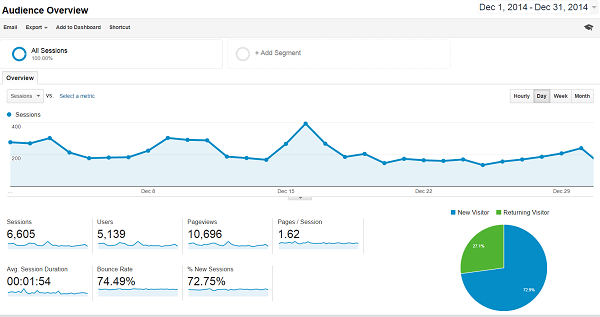 How to Get Things Done With a Remote Team

How to Go Viral in 10 Easy Steps