Anyone that has been following my blog for a long time knows that I don't really push products.

You don't see a lot of affiliate reviews here.

You don't see any courses or coaching.

For the most part, the blog seems to be completely unmonetized. I use it mostly for branding and relationship building.

However, last year, I launched my first product to my audience, The Mastery, a premium membership site with an emphasis on masterminding.

And despite having not one, but three bloggers behind it, as well as hundreds of dollars of paid advertising (and thousands on development) it completely bombed.

$1200 may seem like a lot of money, but it's actually less than half of what was spent on development and marketing. Also, 10 paying members is hardly enough to sustain a community.

When a launch flops it's usually one of a few reasons:

To avoid all of the above, we usually try to do some validation. Validating that people want the product, that they are willing to pay for it, and that they are the right people.

This sounds well and good, and it is definitely important.

But the fact of the matter is that true validation is incredibly hard to obtain.

I absolutely love this article by Dan Norris - Is startup validation bullshit?

Additionally, he had numerous qualitative data, like surveys, that said people were willing to pay for his product. Without a doubt he had authority, as he has been content marketing for years.

In short, he did as good a job as most of us can do to validate the product, only to find out that all the signals were wrong when it came time to charge.

Our experience with The Mastery was somewhat similar.

Here is some of the validation that we did:

Of course, there was no guarantee from the above that the idea was "validated", but there were indicators that this was a pain point that people would be willing to pay for.

So what gives? How come a product launch to nearly 5k people failed so hard?

There is absolutely 100% reason to believe that, to some degree, it was a product that no one wanted. Or perhaps they weren't willing to pay for it, or didn't see the perceived benefits of it (poor communication on our end).

But I also think to some degree our 5k email list (a mix of our own personal blogging lists plus 5o0 paid advertising signups) was simply overrated in terms of how many sales it would drive.

Consider the following points as to why email is simply not as effective as it used to be.

At the end of every month I go through my email list and clear out people who have not opened a single email from me in two months. If someone is not opening my emails, then there's no reason to have them on my list.

You would think that since I am cleansing my list pretty often that my open rates would climb significantly.

In fact my open rates have remained between 20 - 25% pretty much as long as I've had my newsletter. If anything it looks like they are going down! 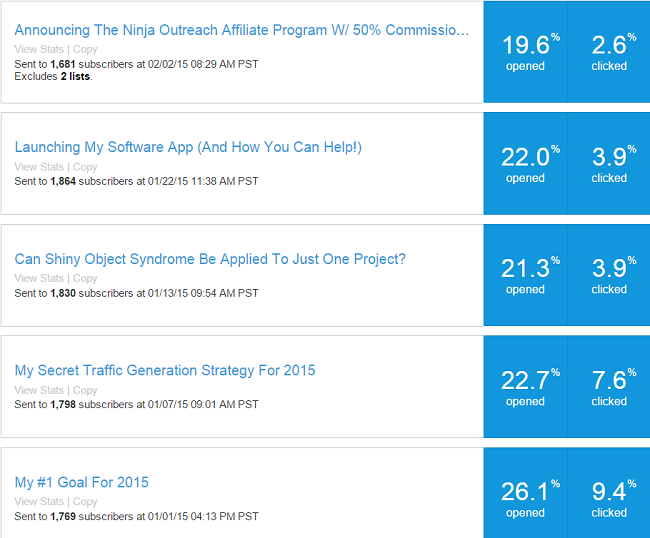 Essentially, people that were once openers have stopped. It isn't that they have unsubscribed, they have just gone inactive.

It doesn't take much imagination to understand that a lot of people are overwhelmed with emails.

Take my girlfriend for example, if I look at her email list there are over 9,000 unread messages.

Basically, she just isn't keeping up.

So is it any surprise that any lists she is subscribed to are not getting open?

9,000 might be an extreme example, but you don't have 9,000 unread messages to be overwhelmed.

Now when you look at your email, you only have time to look at the top priority things.

Consider the open rates I mentioned before, 20 - 25%, which I think is about average for a blogger. Now if I look at the click rates, which is more or less what actually matters, I'm looking at single digits.

Let's face it, email is a bit outdated isn't it?

Think of all the other things that people have to communicate with one another.

It's doubtful that these things have overthrown email as a primary means of communication.

But they certainly are eroding it to some degree.

I'm not going to say people don't spend a lot of time on email. If anything we spend too much.

I'm just saying it's likely a smaller proportion of our overall time spent on communication - that's my hypothesis at least.

Every extra little bit that you're spending on Facebook, your cell phone, etc, is likely last time that you spend on your email.

Over Reliance On Incentives And Opt Ins

Head over to any blog that is actively and successfully building an email list and you'll see two things:

The reason, of course, is that these things work.

At least in so much as they are successful at building your email list.

But how effective are they at building an engaged list?

Generally, the more coaxing that is required to get someone to opt in, the less engaged they are going to be.

And to top it off, more and more people (and companies) are doing email marketing.

OK, let's not throw the baby out with the bath water.

Of course there are way more case studies of effective email marketing than this one failure.

But if you want my honest take on things, it seems that while email marketing might be the most effective thing out there - it doesn't seem very effective at all.

And I'd be willing to be like most forms of advertising, it's efficacy is declining.

Even 5k people presented with a seemingly well thought out product is not necessarily going to make you much of anything.

Don't confuse this as me saying you shouldn't try to convert more people to your email list. You absolutely should. The message is that you shouldn't be fooled by large numbers.

Nor does engagement make a buyer. In our case, of the 500 people who followed along with the email series, only 10 ended up paying.

And, what now in regards to The Mastery?

The truth is, we refunded all the money. It just didn't seem right to have a paid community with only a couple of paying members.

And once we refunded the money, it made it difficult to run the community. We had no resources to invite guests and improve the website. We also just lost motivation.

Our first thought was to downgrade to a free yet private community and invite people ourselves. Eventually, we would build it into something that people would want want to pay for.

But that didn't work.

Then, we thought about just making it a public forum - to be continued!

What do you think? How much money are you making from your subscribers?

Case Study - How To Learn To Speak Like Your Customers