For those of you who don't know, ProductHunt is like Reddit for cool, new products. Each day products are showcased and the audience can upvote them (no downvoting). Generally only a handful are showcased a day - less than 20.

ProductHunt is known to send droves of traffic to the products that get featured because the website itself gets so much traffic and has a highly engaged audience. Products, generally, are submitted only once, and receive the most exposure on the day they're submitted.

Naturally, the more they're upvoted the more traffic it will send you - just like being at the top of Google search results.

Here's what happened for NinjaOutreach. 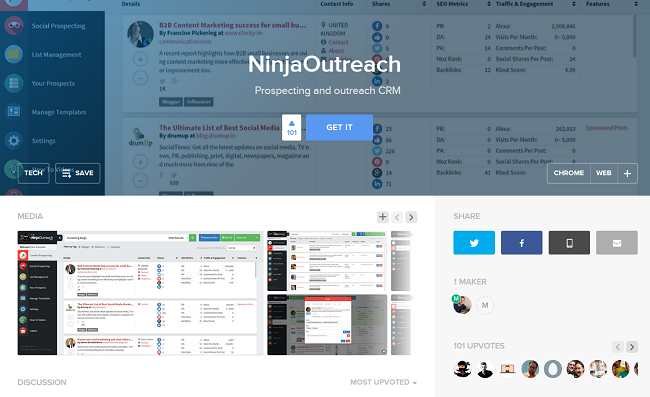 Getting Submitted To ProductHunt

One does not simply submit their product to ProductHunt - it's a process.

It's a highly curated community and only select people who have spent months engaging and participating in the community have the right to submit products. I could not just submit NinjaOutreach to PH.

I had two options:

I chose the latter, only for the reason that I thought it would be quicker.

I decided to implement the strategy that Matthew talks about here.

He explains it best, but the short version is to find people who are engaged in the community and tweet to them to see if they would be interested in checking out your product. Naturally, this is a segue to getting featured.

It's a relatively humble strategy, but it's direct, so I decided to give it a shot.

Each day, I casually tweeted to 2-4 people from the community to see if they were interested in checking out NinjaOutreach. A tweet I would send out was the following:

@erictwillis - would you be interested in submitting NinjaOutreach.com to PH? Would love to show it to you!

After a few dozen tweets and about two weeks, two people agreed to take a look at the product, and one of them eventually submitted it.

All in all, it didn't take much effort, but it did take some time. I didn't want to just blast 100 tweets right away, but I also didn't know how else to get in contact with people so this seemed like the most fruitful strategy - and it worked!

Here's Where It All Went Wrong

I was very thankful that the individual submitted the product, but unfortunately it was very haphazard and without any discussion with me.

I was informed that the product was submitted on Sunday at around 6PM EST while I was at the gym. This is a relatively poor time to be featured because most of the other products that are in your bracket (i.e the Sunday ones), have been on there for the whole day and have already received a lot of exposure and upvotes. Getting to the top at this point is basically impossible.

In fact, NinjaOutreach was the last one to get submitted that day and started at a pitiful 1 upvote, while the top one already had over 200.

Additionally, it was submitted without any images or a proper description. As the founder you'd think I would have the right to make changes, but actually because I was not an official member of the community I couldn't. In fact I couldn't even respond to comments about my own software!

It goes to show the community is a little bit broken in this regard. I think they go too far to keep out spammers.

But that's why it's so coveted.

It seemed as though all was lost and we were just going to sit at the bottom and fade into oblivion...

Here's Where It Started To Go Right

I rushed home from the gym to see if I could salvage the last 6 hours of the night.

After a few hours I was able to get ahold of someone who invited me into the community and gave me access to edit my listing and respond to comments.

Although you're not technically supposed to ask people to upvote your listing directly, I guarantee everyone does, and since we were already well into the night I figured I had to go this route if I was going to get any exposure at all.

Naturally, I went to Skype, GChat, email, etc, to find anyone who would be kind enough to upvote our listing and give it a little love. A lot of people were kind enough to do so and within an hour or two NinjaOutreach had a few dozen upvotes.

Realistically, this wasn't going to be enough to get it anywhere near the top, but it did keep it from the absolute bottom. The worst would be to fall beneath the "View More Products" slot that they have at the bottom of each day - we were only two above that the whole time. 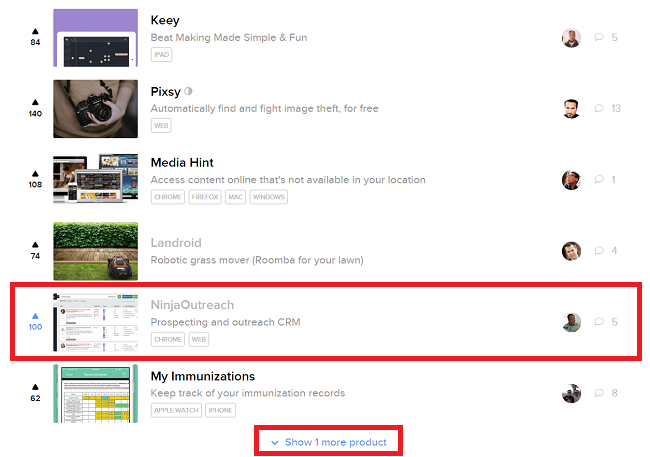 I also got a newsletter ready to send out the next day to our list of a few thousand people. By Monday, it had over 100 votes, although it was still at the bottom and was going to remain there for as long as the listing was live on the website.

IMPORTANT: Do not send people directly to your link to upvote it, they have to go to the home page and find it, then upvote it. This can tank your rankings, as several people pointed out to me. I certainly made this mistake.

How Much Traffic And Sign Ups Did ProductHunt Send Us?

So let's talk numbers. Here's how much traffic PH sent us for the week: 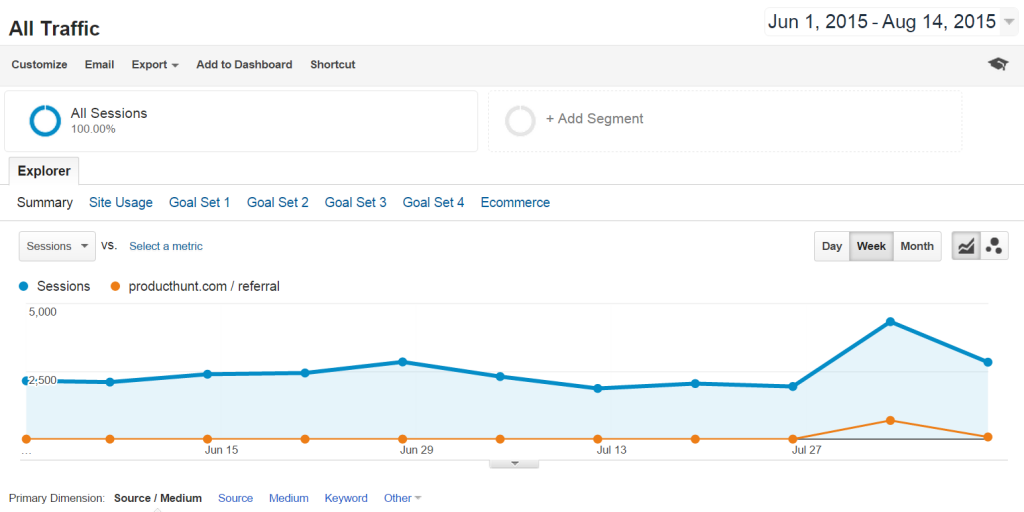 You can see the bump clearly. ProductHunt sent us 688 sessions. Which is pretty good, that's about 33% of what we get in a normal week.

Now, sites like ProductHunt are known to be high-traffic, low conversion. Their audience is interested, but not generally committed to the products that are showcased.

Like Reddit, they tend to come over, take a look around, and bounce onto the next thing.

That said, if you have a product that fits well with the audience (startup enthusiasts, marketers, designers, developers), you have a decent shot of getting some actual conversion. NinjaOutreach is a decent fit for their audience, since it's a digital marketing software.

According to our tracking, this resulted in about 34 sign ups. Though, I'm embarrassed to admit, that might be clicks on the pricing page but not actual checkouts. Since this usually has a 50% form abandonment rate - it's probably more like 17 or a 2.5% conversion rate.

That's also pretty good - in fact it's better than our average visitor conversion which sits at around 2%.

If a signup has a 50% chance of becoming a paid customer, and an average customer has a lifetime value of $200, you can ballpark the value of this feature on ProductHunt as being around $1700 over the course of the lifetime of the signups.

It's an estimate of course, but gives you an idea.

Did Any Other Benefits Come From It?

Firstly, it's important to note that the sign ups above are direct sign ups. It's possible that people saw us, poked around, and came back later on like a few days later and signed up. In that case, their referral would be attributed elsewhere.

The above is essentially a conservative estimate, and in fact, since we've been featured, sign ups have been through the roof.

And not just the week of the feature, but the week after too.

Though to be fair, we had some other nice features go live such as guest posts on BoostBlogTraffic and Unbounce. It's really just all come together at the right time.

In addition to signups, we received a few nice emails from investors and other people interested in business development.

Conclusion - How Important Is Product Hunt?

Although I don't think our product would have made it to the very top anyway, a better-executed strategy could definitely have improved the results - maybe even doubled them (who knows?).

That said, despite the awful start we still got some decent exposure in terms of traffic and signups.

No, this is not going to make or break the business by any stretch of the imagination.

But it did make for a great week, some positive reinforcement, and overall good exposure that we can ride into other opportunities. There really is no reason NOT to try to get featured on PH - the question is when?

NinjaOutreach has been out since January, and therefore it isn't a "new" product in the usual sense.

That said, I'm glad we waited utnil we did to submit it.

Had we submitted it right away it would have been a complete flop.

We only knew these things after months of tracking our analytics and making improvements. We couldn't have known them right at the start.

Plus we just needed more development.

I'm all for MVPs and getting to market quickly, but I do think that's somewhat exaggerated. If we had gone straight to PH with our product back in January it would have been a complete waste of an opportunity, because none of the traffic, or very little, would have converted.

So my recommendation is wait, but don't wait forever. Wait until you feel like you hit a reasonable milestone, to the point that the product won't be getting significantly better for months.

We hit that milestone with the launch of a bunch of new features the Friday before submitting, and had made a lot of progress on our website and copywriting, so I think it was a great time - not too early and not too late.