Social Media Strategy is utterly important for today's digital presence. From top consumer brands to US presidential candidate everyone is adopting social media strategy to get their words out.

We’ve found that Twitter has been a great way for us to connect on a more personal level with our employees and customers. - Tony Hsieh, CEO of Zappos.com

Courtesy of StasticBrain we know the following facts about Twitter

It's quite clear that Twitter is big, and it's here to stay.

34% of marketers have generated leads using Twitter. (source: Digital Buzz Blog - and this was back in 2012)

If the above just seems like a lot of large numbers, consider the following case studies:

Perhaps those case studies seem unrealistic ("Well, I'm not Zappos, I don't have their marketing budget, their analytics, their man power").

Yes, you may not have all those things.

The fact of the matter is, Twitter has a limited functionality. There are only so many things one can do with Twitter (though as you will see, it is more than you realize).

And anything that they can do, you can do.

So let's cut through the BS, dive right into the data, and find out what works and what these guys are doing to boost their sales.

Who This Tutorial Is For?

Who This Tutorial Is NOT For?

If you fall into this bracket then I encourage you to check out the resources at the end of this post. There are some great articles that will teach you the basics.

What You Will Learn

Before you do anything you have to build out your brand image. This starts with your Twitter profile.

This seems obvious, but many people are not taking full advantage of what's available.

Everyday on Twitter I see someone not including a link to their website or not utilizing a background image.

What's the point of even having a profile?

Who's Doing It Right?

Other ways to attack this, especially if you are a smaller, more local business, is to include relevant information such as:

Additionally, there is the large background image.

Consider how CapitalOne advertises the NCAA (for which they are a sponsor) AND includes a current offer, tying it in with a catchy hashtag to monitor the campaign. 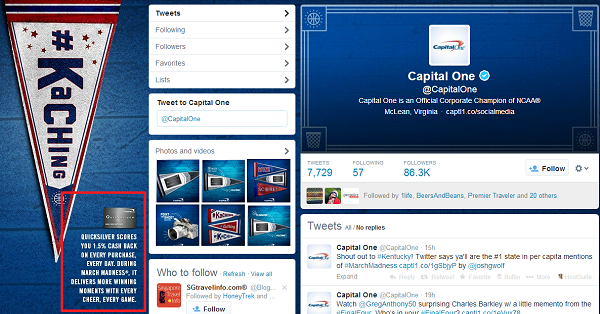 Did you notice the hashtag  #KaChing on the top-left pendant?

By tying everything together we can create a consistent brand theme for our users. This is not just for show, but serves practical uses such as directing users to our website and current offers.

Twitter is new to us. That said, in a few short weeks we’ve had definite increase in all sorts of traffic. Out of the normal inbound leads, the number has increased 15% and two of the inbounds are now active pipeline opportunities. We’ve found one extremely valuable partner relationship. - Mike Damphousse of Green Leads

Once you've built your brand you are going to want to market yourself to customers. Here's how:

Twitter's advanced search gives you all the marketing tools you need to find and follow potential customers. 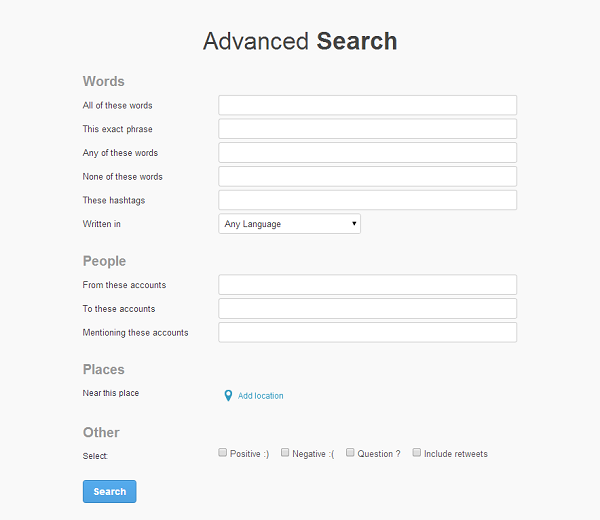 Don't let "advanced" throw you. Here are some simple ways to make use of it:

Words: Target words and phrases related to your product or business. Think beyond the obvious. For example, if you sell vacuum cleaners search for terms like "messy house" and "spring cleaning".

Not to pick on Georgia and her general untidiness, but she is just asking to be marketed some cleaning products that work!

People: One thing I never see businesses do is asking people for their Twitter handle (like asking for an email address, but less intrusive). Start asking your customers for their social media handles and follow and engage them. Imagine these two scenarios:

Which customer is more likely to come back?

Geography: If you're a local business, start following people in your geographical area and making them aware of what you offer. People tend to do business where they live or work to try to minimize the commute. Make sure they're aware of your presence.

56% of customer tweets to companies are being ignored. (sources: AllTwitter)

More and more people are using Twitter as a platform to try and connect with the companies they use and know. In fact, new research shows that 60% of customers prefer Twitter over Facebook for customer care issues.

And yet, they are largely being ignored.

If we learned anything from the Zappos case study mentioned earlier, it's that starting conversations with customers can drive more traffic, sales, and likely lowers our attrition rate.

And what's to stop us from starting conversations with our competitor's followers?

After Cheryl destroys that card she's probably going to be in the market for a new bank, especially if there is one that doesn't charge interest on a $0 balance.

And it doesn't stop there.

For a more detailed explanation check out Neil Patel's article on how to steal our competitor's Twitter followers.

It's time to forget about the old school ways of marketing. We've seen that social media marketing can be some of the most cost-efficient marketing around.

So consider paying to increase the visibility of your tweets by experimenting with Twitter’s promoted tweets product. Obama did in the 2012 election, and we all know how that turned out.

Remember how much data Twitter has on its users. This leads to exceptional targeting by keywords, interests, geography and devices. 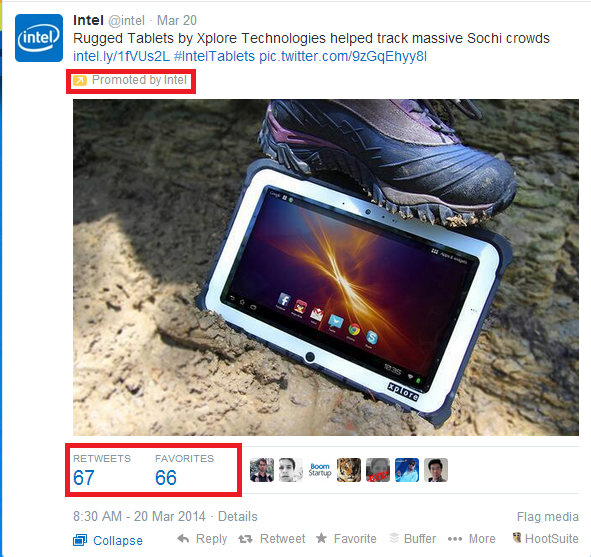 Compare this to say, a TV ad which is insanely expensive and not very targeted.

Although using twitter's own search function and outreach features like tweeting and direct messaging has its own place. It can become very tough to reach out to top tire influencer of your niche using just twitters mention or direct messaging features.

Those influencers are regularly being bombarded with mentions and messages.

Too often marketers forgets that tweeting and retweeting alone can not bring exposure.

Too often marketers neglect their current customers in search of new ones (hence why 56% of cries are left unheard).

Just as important as finding new customers is engaging current ones.

And to do that, we need to know what works.

How do we get our tweets noticed?

According to bitly, the half-life of a tweet is around 3 hours. In short, we don't have much time, so anything we can do to extend our message is precious.

Here's how we do that.

Cut To The Chase With Tweets

Twitter is like the lightening round of a game show, you have to be quick and to the point. Studies show that tweets under 100 characters get 21% more engagement.

Consider one of the most popular tweets of all time is just three words. 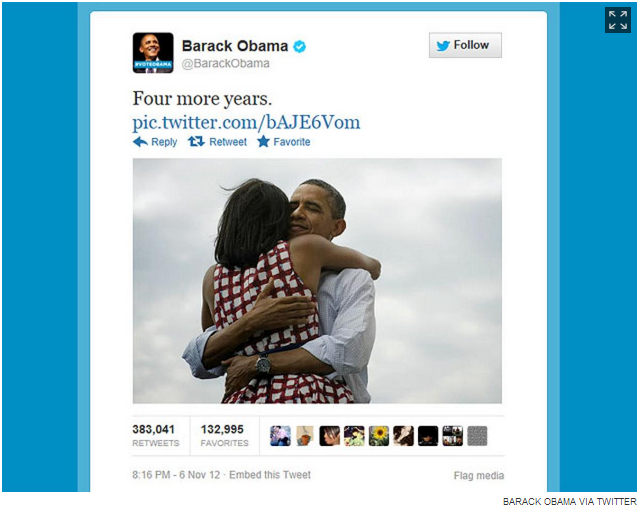 Of course it helps to be the president, but we don't need to have the most popular tweet of all time.

We just want to get noticed.

While you're at it, toss in a few numbers or symbols as it helps the tweet stand out.

I can see it even in my own blog. Look at some of my most tweeted posts. While 101 Business Quotes From Influential People is arguably my most "useless" piece of content, it's one of my most shared posts.

A fluke? I think not - studies agree.

A tweet with a quote is 54% more likely to get retweeted.

Quotes resonate with people at a deeper level. It also makes them feel smart, and we all like to feel smart.

Consider how you can implement quotes into your marketing efforts. For example, traditionally I would probably tweet this article as its title, but what if instead I grabbed one of the above quotes and simply added my link at the end?

Additionally, a good quote can add an air of mystery around the link. It hints at what's inside without telling the whole story, inviting me to click.

Ask For Retweets, But Don't Beg

Now, nobody likes a beggar, but ask and you shall receive.

It's a fine line but if you don't press your fans even a little bit you shouldn't expect them to support you out of the goodness of their heart.

Use Catchy Images And Videos

A picture is worth a thousand words, which is a lot more than the 140 character limit.

Did you see the above tweet from Obama? Were you surprised to see it included an image?

Yes, you can do that.

Yes, you should do that.

In fact, studies show that tweets with image links get two times the engagement rate of those without. 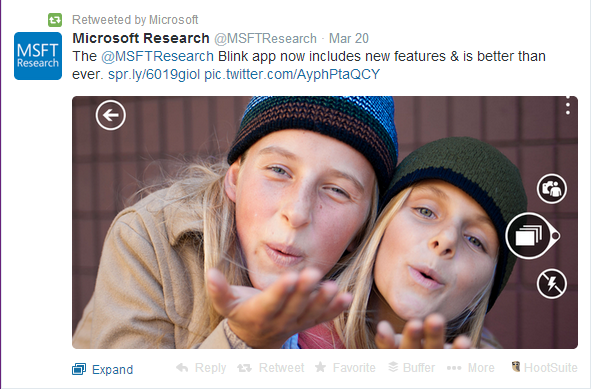 This image employed by Microsoft to promote their Blink app seems largely unrelated to the app itself.

But who cares - it gets my attention.

The image has a clear focus point and interacts with the viewer directly.

If you really want to get noticed, use images.

They're more eye-catching. They take up more space. They tell a story.

Get Creative With #Hashtags

Many of you might recall Justin Timberlake's and Jimmy Falon's hilarious parody about obnoxious hashtag usage.

Well, research indicates that it's not just teenage girls abusing hashtags, but powerful brands as well.

According to Search Engine Watch, out of the 34,707 regular tweets (tweets that don't include an @ reply or a retweet) that the Interbrand 100 companies posted, 45 percent included at least one hashtag and more than 67 percent included one or more hashtags.

And there's a good reason, since tweets with hashtags receive two times more engagement than those without.

Twitter is a big, wide world and hashtags are a phenomenol tool for organizing it.

Remember the #KaChing campaign I mentioned above?

Marketers create campaigns all the time, some successful, and some not.

Sure they had to lower the price of one pizza for a few hours, but how many incremental sales did that drive?

How much exposure did they get between the campaign AND the article write ups afterward?

Most business owners overlooks the notion of Twitter for businesses

They don't get it.

They look at it and they don't see anything beyond a white box with a 140 character limit.

However, used correctly and Twitter becomes a powerful marketing tool that can drive serious leads.

If you liked this article, follow me on Twitter, and check out these other great articles below!

How to Influence Bloggers and Make Them Use Your Stories

For Link Builders: How to Find the Best Link Building Prospects

Case Study - How To Learn To Speak Like Your Customers